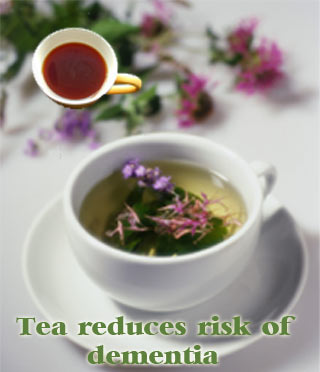 Tea lovers can now happily indulge in tea daily as a recent research suggests that drinking two cups of tea halves the risk of dementia. An initial sign of dementia, cognitive decline, is less likely to occur in those people who drink two cups of tea everyday. However the same reduction in risk of dementia does not apply for coffee drinkers which suggest that the key could be antioxidants in black tea.

The researchers commented “Because tea is cheap, non-toxic and widely consumed, it has huge potential in promoting cognitive health and perhaps delaying dementia.”

The study was conducted by scientists in Singapore by reviewing the lifestyle of 2500 people aged 55 or above and a report on the amount of tea consumed by each of them was maintained. The cognitive function that is the fitness of the brain of each volunteer was then tested. After two years it was found that people who drank the most tea had fewer chances of suffering from cognitive decline. The risk of the illness was cut by 63 percent in heavy tea drinkers i.e. those who drank 6 to 10 cups of tea daily whereas in those who drank 2 to 3 cups the risk was reduced by 55 percent.

The American Journal of Clinical Nutrition reported that the same could not be concluded for coffee drinkers. They either saw a tiny increase in the risk of dementia or no benefits at all. Researchers also said that whether the addition of milk would reduce such effects is yet to be determined.

Tea prevents the building up of brain deposits called plaques which are believed to trigger Alzheimer. Green tea and black tea surely has a number of benefits ranging from reduction of cancer risks to preventing heart diseases and now reduction in risks of dementia.