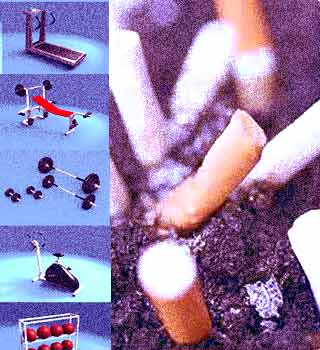 A recent study by Spanish researchers shows a direct relation between sports and tobacco consumption. It suggests that physically active adults are less likely to smoke than their non-active counterparts.

The study was conducted by researchers of the University of Granada, the Spanish National Research Council- CSIC, the Universities of Murcia, Zaragoza and Cantabria, and the Nuestra Señora de la Consolación School of Granada

The study took samplings of 3000 Spanish adolescents. A questionnaire was given to the participants to know their habits. Findings of the study reveal that 8 out of every 10 Spanish adult who plays a sport does not smoke and more than 40 % of them aged between 13 and 18 do not practice any physical activity. Compared to 71.4pct of the non-active adolescents, nearly 80.9 per cent of the active subjects said that they do not smoke.

Additionally 59.2 % of the adolescents were physically active; with 71.1 % boys as against 46.7 % girls and 15 % of the adults were regular smokers, with more boys than girls. The researchers thus concluded that increased involvement in sports can significantly cut adolescent tobacco usage. They asserted that tobacco consumption increases as physical activity is reduced when we get older.

According to the scientists, promotion of physical activity could certainly play an important role to eradicate tobacco consumption among the youth. These measures are necessary as physical activity, diet, tobacco and alcohol consumption are related to obesity, diabetes, coronary disease, osteoporosis and cancer.

The study is published in the journal Nutricion Hospitalaria.