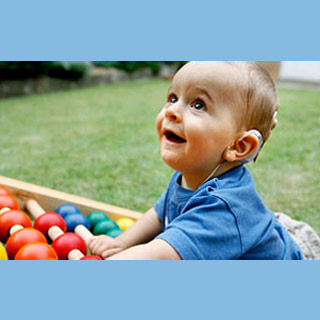 Cochlear implants could possibly be beneficial for children born with profound deafness. Apparently, the apparatus is surgically inserted inside the inner ear thereby allowing the hearing impaired kids to identify speech and sounds. A novel study from Université de Montréal claims to understand how such devices appear to affect the long-term language development of these children.

The study was believed to have focused on approximately 27 children who received implants at before age two. Moreover, these children seemed to have lived with the device for at least two to six years.

In order to test their language performance, Duchesne was observed to have provided them with measuring tests namely vocabulary comprehension, expressed vocabulary, the understanding of concepts and sentences with subtleties like passive form and nouns in plural form.

“We don’t really know what hearing impaired children really hear with the implants. The only testimony we have comes from adults who describe the speech of the children as comparable to Donald Duck. The implant doesn’t provide the finesse of natural hearing, and even adults who once had perfect hearing, must once again learn to decode sounds and speech.” says Louise Duchesne, professor at the Université de Montréal‘s School of Speech Therapy and Audiology who conducted the study.

The study experts found that of the 14 children who were of age’s five to eight, four seemed to have superb scores in all aspects of language.

Professor Duchesne further stated that “Their level of comprehension of words, concepts and sentences was even higher than the average of children without hearing problems. However, 10 other children had major difficulties understanding sentences and three of these kids had problems in all aspects of language.”

Supposedly, difficulties with cochlear implants aren’t related to sex, implant brand, schooling or even the medical history. However, the problem seems to lie in data treatment.

“Children with less severe hearing problems who wear a hearing aid often have the same morphosyntactic problems – a difficulty hearing certain words, such as pronouns and articles. Perhaps because we pronounce those words too quickly,” says Duchesne.

Cochlear implants fail to provide the same results in all children and do not guarantee linguistic success.

Duchesne claimed that parental participation in the auditory learning of hearing impaired children seems to be crucial. She was of the opinion that parents must repeat speech therapy exercises with their children at home, because they won’t be able to learn how to process the information on their own.