Cancer in modern science is either cured by radiation therapy, chemotherapy or by surgical means. All having its own pros and cons. Chemotherapy is much known for its side effects in all types of cancer. 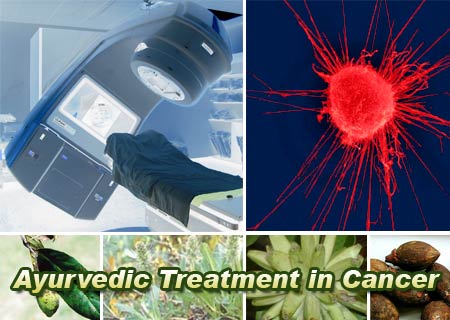 The radiation therapy uses high energy ionizing rays like X-Rays, Alpha/Beta or Gamma rays, Radioactive Cobalt Rays etc. This is usually in conjugation with surgery or chemotherapy or alone. So is the case with chemotherapy. The drugs used are either platinum compounds like cisplastin, or alkylating agents like cytoxan, or antimetabolites like hydroxyurea and methotrexate, or mitotic spindle inhibitors like vincristine, vinblastin.

Surgeries done are palliative, salvative, reconstructive etc. Radiation treatment has its effect on rapidly dividing cells, epithelial tissue, like mucous membranes and skin, which thus makes its more susceptible to infections which are secondary to decrease in skin integrity cause of radiation.

The Ayurvedic medicines likely to be used in cancer of different organs are as follows.

a) Kumara: known as aloevera – it contains active ingredient known as imodine and lectines which increases T lymphocytes, this T-lymphocytes produce cytokines which destroys microbes and tumor cells. Kumara is effective in treatment of most malignancies except cancer of pancreas and brain. After surgical removal of the gland kumara is valuable for removing last traces of cancer cells. Carrots and tomatoes are also useful in cancer of prostate.

12. Drugs and diet useful in leukemia:

Grapes, mulberries, and peanuts – They act as antioxidant and antimutagen. Hence it prevents formation of cancer. It stops progress of leukemia. Resveretol is found in large quantity in fresh grapes particularly in skin of grapes, peanuts and mulberries. Sarpagandha nown as rauvolfia serentina in latin contains 50 alkaloids like reserpine, recinnamine. The active principle deserpidine has anti leukemic properties. This compound prolonged the survival time of mice with leukemia by 50% reserpine showed antileukemic activity only in very high doses which produces marked depression.

Chitrak known as plumbago zeylanica in latin, has active principle plumbagin. It is active against lymphocytic leukemia.

The Ayurvedic treatment for some common symptoms due to allopathic treatment of cancer is given below.

1. Stomatitis: it means irritation of oral mucosa. A whitish pseudomembrane may appear which is very painful at times making eating and speaking difficult. When
stomatitis is severe, secondary infection of bacteria or fungus takes place.

a) Gargle with milk medicated with yashtimadhu, kakoli, ksheerekakoli and ashgourd kooshmanda.
b) Gargle with decoction of leaves of jaati, daruharidra, triphala and guduchi
c) Mixture of leaves of jati, triphala, patha and dried black grapes should be chewed, kept in mouth for sometime and spat later.

Application to ulcers is ghee medicated with yashtimadhu and turmeric, jatyadi oil

In such cases low residual diet is indicated and decrease in fat in the diet should be made. Milk should be avoided, limit activity after eating – rest for half an hour, do not lie flat for at least 2 hours after meal.

6. Cough: Treatment of vataja and pitaja kasa is indicated if the cough arises as a complication of radiation.

7. Skin if damaged by radiation: Skin appears to be dry, itchy, flaky. In some cases there can be discoloration of skin with sloghing and exudates.

8. Use of soaps should be avoided over the sloughy skin and should be washed/cleaned by savlon (anti-septic liquid) or turmeric oil.

9. Ulcers on skin: radiataion produces vataja and pittaja ulcers. Spray or apply the following medicines in a paste form.

10. For healing faster: Use ropana oil or jaatyadi oil locally.

11. Pain: Take mahayograj guggul for dull pain, sense of heaviness which is indicative of kaphaja pain. For burning pain sensation take suvarna sutashekhar as it is pittaja type of pain. While pricking and severe pain is indicative of vataja types and mahavatavidhvansa is useful in such cases.

13. Excessive salivation: gargling with decoction of triphala, cathechu and hareetaki is useful.

15. Constipation: take errand/castor oil, 2 spoons before sleep or add this to wheat bread or tea once in day. Eat more fibre as in chapatti (Indian Bread) of wholegrain, ghee, dried black grapes, Khichdi (A South Asian dish made of Rice and Lentils), leafy vegetables.

a) A mixture of sarjikshara, moolakakshara and shankhbhasma can be used.
b) dashangalepa
c) Ash obtained by burning the vegetable suran (Yam Elephant) can be applied.
d) Mixture of turmeric powder, moolakakshar and shankha bhasma can be applied.
e) Powder of sulphur, vidang, yavakshar and ginger is also helpful
f) Powder of kushtha and romak salt mixed with banyan juice can be applied.
g) Mixtures of powder of turmeric with lodhra, manasshila, asafoeatida, patha, woodapple (kapittha) are a nice combination.
h) Mixture of pippali and lime.
i) Agaru.
j) Mrachut – copper sulphate.
k) Yavakshar with cow’s urine.
l) Mustard oil.
m) Shadbindu oil.

18. To prevent weight loss after or during chemotherapy:

a) Add two table spoons of milk powder to half a litre of milk and use this in drinks and cooking
b) Add dals, lentils, and beans to soup. One should eat sprouted cereals and pulses.
c) Eat snacks like fruits, dry fruits, beans, cheese and yoghurt.
d) Have mashed potatoes and baked vegetables with melted cheeses or butter.
e) Chapatti dough should be made with milk instead of water

19. Difficulty in chewing and swallowing:

a) Chop meat or vegetables as finely as possible and cook till very soft.
b) Fruits should be stewed or pureed.
c) Add milk powder or meat stock to liquid nourishment to increase the protein intake – to decrease fever after chemotherapy – drink cold decoction of cumin seeds, gokshuraka, coriander and sugar.

Indian gooseberry juice known as aawala juice is rich in vitamin C, which is very helpful to built up damage tissues. Natural source of vitamin E is wheat germ, which is again helpful in providing good oxygen and blood to damage tissue along with vitamin B.

Above explained therapy play an important role as a supportive care to side effects of cancer treatment by allopathic way. Few other things have to be taken care by all the patients undergoing anticancer treatment. During the course of treatment, either due to disease or suppressive effect of chemotherapy, patient’s various types of blood cells are suppressed and production of WBC, RBC and platelets is inhibited or destroyed. Hence these patients are prone to infections and such infections spread very rapidly in their body. So to avoid this one must always start antibacterial treatment in conjugation with other anticancer therapy.

Patient should wear mask to avoid getting respiratory tract infections. Getting Complete CBC done regularly during the treatment period is very necessary to monitor toxic effects of chemotherapy. If required bone examination is indicated.

Positive mental attitude makes a lot of difference in whole course of treatment and its outcome. It is a key to successful treatment. Patient should carry a tender devotional heart which is occupied by a positive mental picture. Where in patient should think that what so ever happens, it happens to the body and not to me. I am the soul, the infinite, the indestructible. I am omnipresent, omnipotent soul. I am the part and parcel of god himself. If god wants me to continue with this body then he shall cure me or else I have no resistance to leave it. It is he who has given, so he can take it at his will. Let thy wish be done.

This is the mental picture which makes patient relaxed and body takes its best accord to cure cancer. Patient can also try giving auto-suggestions to his/her mind stating that I will be cured of this cancer permanently with this therapy. I am totally convinced and I know this therapy is going o be very successful. This auto suggestion works as catalyst and enhances the effect of drugs, making patient diseases free at earliest. Enhancing effect of drug is not applied here to think in terms of toxicity of drugs. It should be considered in positive way. All auto-suggestions have to be given many times a day. If given after practicing yoga nidra or brain breathing technique, it enhances the power of auto suggestion.