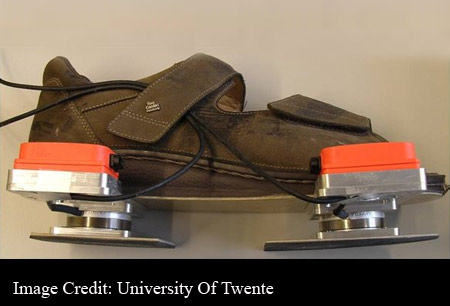 Martin Schepers from the University of Twente was believed to have developed a novel pressure shoe. Apparently, the shoe includes four sensors which could measure movement and pressure during walking. This not only helped doctors in acquiring a quick and precise image of the walking pattern but also permitted them to plan the correct way of treatment.

This new development should help doctors gain more accurate images of the walking patterns of patients in a rather quick way. Doctors can then prescribe the right treatment for their patients. For instance, people who seem to have suffered from a stroke may have difficulty in walking.

At present this is known to be done through a particular tile identified as the pressure plate which has sensors for calculating the walking style. This plate was believed to have been cautiously implanted inside a space. The patient was then noted to have been given a signal of where he should start his walk, but he was not informed where the plate is placed. This was done in order to avoid influencing the patients’ walking pattern. This method was lengthy for both the doctor as well as the patient.

The new intelligent pressure shoe supposedly comprised of a sandal that incorporated both the pressure and movement sensors. Energy exerted while walking was believed to have been measured by the pressure sensors whereas the movement of the foot was measured by the movement sensors. This method was believed to simplify the analysis of walking patterns as patients simply have to wear the shoe and walk. In comparison to the earlier method, it got over in nearly 30 minutes with having achieved all the necessary measurements. The study observed that the shoe as well as the pressure plates seemed to have performed equally well.

In addition to this, Schepes also worked on the measurement of movement. While the movement sensors are situated on the shoe, but they allegedly also hold on to the body to follow the movement. However a drawback of these sensors is that they fail to guess the distance. Also there seemed to be no sign of where they were placed on the body in relation to one another. For this purpose, an innovative measuring system was invented which seems to work with the help of magnetism. This portable system has now been optimized by Schepers. The source was observed to be located at a central point on the body. In order to estimate the position and direction of the sensors ‘the reel’ was used in relation to the source.

This study was believed to be a part of the Free Motion project and was funded by the Ministry of Economic Affairs. Martin Schepers has being awarded his doctorate in the field of Biomedical Signals and Systems in the Faculty of Electrical Engineering, Mathematics and Computer Science. Martin Schepers at present is working for Xsens Technologies. This company is looking at the developing the pressure shoe into a commercial product.