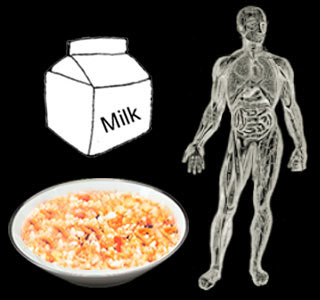 A team of investigators have evaluated the physiological effects of cereal and milk post exercise. Their main aim was to tally the effect of these foods with those of sports drinks, post exercise. This study was conducted by Lynne Kammer, exercise physiologist from The University of Texas, Austin along with a team of experts. All the investigators of this study are believed to be scientists in the College of Education’s Department of Kinesiology and Health Education.

They have stated that unlike any other sports nutrition study, the present study designed exercises which would mirror the subjects routine exercise session. For this purpose they were stated to have analyzed about 12 trained cyclists. These subjects were apparently asked to cycle at a comfortable pace for a period of about two hours.

Kammer says that, “Our goal was to compare whole grain cereal plus milk—which are ordinary foods—and sports drinks, after moderate exercise. We wanted to understand their relative effects on glycogen repletion and muscle protein synthesis for the average individual. We found that glycogen repletion, or the replenishment of immediate muscle fuel, was just as good after whole grain cereal consumption and that some aspects of protein synthesis were actually better.”

It was further also stated that cereals and non-fat milk may be a better economical alternative as compared to sports drinks. Kammer has further explained that, “Cereal and non-fat milk are a less expensive option than sports drinks. The milk provides a source of easily digestible and high quality protein, which can promote protein synthesis and training adaptations, making this an attractive recovery option for those who refuel at home.”

These experts have concluded that non-fat milk and cereals may be a better option for those people who are following an exercise regime. The consumption of cereals and milk may prove to be equally effective as compared to a sports drink in initiating post-exercise muscle recovery.