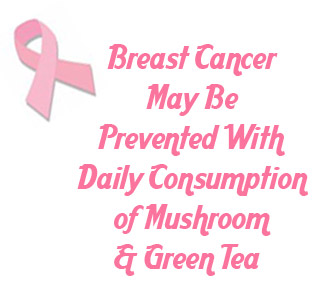 Various studies and researches have been conducted for the purpose of discovering a potential cure or preventive measure against cancer. Now, a newly conducted study has suggested an economical and easy way of preventing the onset of breast cancer. They have stated that mushroom and green tea consumption may perhaps shield a woman against the onset of breast cancer. This study was conducted by The University of Western Australia, in collaboration with the Zhejiang University in China.

It has been stated that the cases of cancer are significantly lower in China as compared to the developed countries. Thus, the study investigators wanted to determine if this was due to the frequent use of mushrooms and green leaf tea in the traditional Chinese diet. For the purpose of the study, more than 2000 women were analyzed. It was stated that around 50 percent of these women were suffering from breast cancer, while the rest were healthy.

“Mushrooms and mushroom extracts have been shown to possess anticarcinogenic properties and to stimulate immune responsiveness. And it has been found fairly consistently in epidemiological research that green tea has anticarcinogenic effects against breast cancer,” says Professor Min Zhang from the School of Population Health, University of Western Australia.

On questioning the study subjects on their mushroom and green tea consumption, a list of frequently consumed mushroom species were obtained. The most frequently consumed mushroom species were said to be fresh white button mushrooms, Agaricus bisporus, and fragrant dried mushrooms, Lentinula edodes. It was stated that while some of the subjects consumed both green tea and mushrooms for about three times per day; others did not consume either of them.

Dr. Zhang observed that, “We found that the combination of dietary intake of mushrooms and green tea-drinking decreased breast cancer risk with an additional reduced effect on the malignance of cancer. Our findings, if confirmed consistently in other research, have potential implications for protection against breast cancer development using an inexpensive dietary intervention.”

It has been stated that these findings were obtained after the consideration of various factors like alcohol consumption, menopause, weight, smoking, etc. in these women.