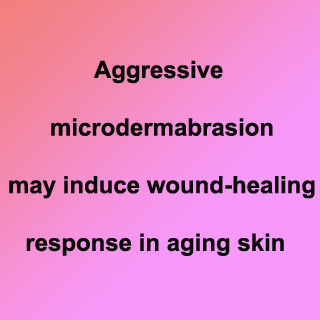 Today, loads of products are available to make people appear young and beautiful. A lot of money is riding on these type of treatments and people also invest their time and energy on them. Such is the importance that is given to looks. It is not surprising that the beauty industry is a billion dollar industry today. One such treatment is microdermabrasion.

Microdermabrasion via a coarse diamond-studded instrument seems to provoke molecular alterations in the skin of older adults that impersonate the manner in which skin is remodeled during the wound healing process. This is claimed by a latest study.

Microdermabrasion is a family of cosmetic procedures popular in day spas, doctors’ practices, and medical spas in which dead outermost surface of the skin is partly or entirely detached by light abrasion, to get rid of sun-damaged skin and to take out or diminish scars and dark spots on the skin.

The process of microdermabrasion supposedly involves buffing the skin by means of grains of diamond or another hard substance. In order to impartially alter the look of wrinkled skin, such a practice would have to apparently stimulate the production of collagen, the chief structural protein in the skin. Preceding studies have illustrated that microdermabrasion using aluminum oxide may not always fuel collagen production.

A biochemical examination of skin biopsy specimens before and 4 hours to 14 dats post microdermabrasion process was performed by Darius J. Karimipour, M.D., and colleagues at the University of Michigan, Ann Arbor. Around 40 adults aged 50 to 83 years took part in the study. Every one of them went through microdermabrasion with a diamond-studded handpiece of either coarse-grit or medium-grit abrasiveness.

When conducted with the coarse-grit handpiece, microdermabrasion led to an augmented production of a broad range of compounds linked to wound healing and skin remodeling. This apparently includes cytokeratin 16, a well-characterized reaction to injuries to the skin’s outer layer; antimicrobial peptides that combat infection; matrix metalloproteinases that break down skin’s structural proteins to facilitate reconstruction; and both collagen precursors and other substances that form the pathway to its production.

The authors commented, “We demonstrate that aggressive nonablative microdermabrasion is an effective procedure to stimulate collagen production in human skin in vivo. The beneficial molecular responses, with minimal downtime, suggest that aggressive microdermabrasion may be a useful procedure to stimulate remodeling and to improve the appearance of aged human skin.”

These molecular changes were supposedly not observed in people who underwent microdermabrasion by means of the medium-grit handpiece. All patients apparently experienced a slight period of redness that usually lasted less than two hours.

The study was published in the October issue of Archives of Dermatology, one of the JAMA/Archives journals.