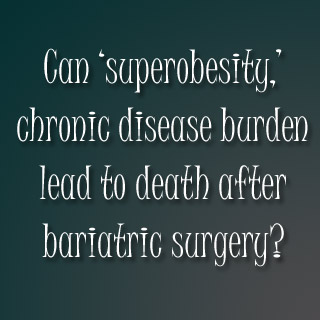 A novel study claims that the ‘superobese’ veterans and those with increased chronic disease burden may possibly die within a year of undergoing bariatric surgery.

At present, nearly 165,000 veterans who use Veterans Affairs (VA) medical facilities seem to have body mass index (BMI) of 40 or greater, is also known as class III obesity. Previous data claims that bariatric surgery is one of the few interventions which could assist morbidly obese individuals lose sufficient weight in order to considerably improve their health and quality of life.

Apparently, the risk of death associated with bariatric surgery is thought to be low. However, most previous studies appear to have involved younger women rather than the older male population that normally makes use of VA facilities.

It was believed that the number of bariatric procedures carried out in approved VA medical facilities have more than tripled between the year 2000 and 2006. However, it was estimated that the surgery is being performed on approximately 0.1 percent of all veterans who meet BMI criteria.

“Whether the volume of the VA bariatric surgery program should be expanded in the coming years largely depends on the impact such operations have on long-term health outcomes,” says lead author of the study, David Arterburn, M.D., M.P.H., of Group Health Research Institute, Seattle.

For the purpose of the study, the authors were noted to have analyzed patient factors associated with the possibility of death among 856 veterans who underwent bariatric surgery in any of 12 VA bariatric centers from 2000 to 2006. The patients seemed to have an average BMI of 48.7 and an average age of 54 years. In addition, nearly 73 percent were observed to be men.

The experts were noted to have performed statistical models for the patients where they were classified as superobese and those with a higher score on a measure of costs related to co-occurring diseases. Supposedly, superobese people were those having a BMI of 50 or higher i.e. 36 percent of the sample. And those having co-occurring diseases may perhaps have comprised of 8 percent of the sample who had an increased risk of death.

The study authors found that superobese patients who accounted for 30 deaths seem to have 30-day, 90-day and one-year death rates of nearly 2.0 percent, 3.6 percent and 5.2 percent. Whereas, those with a higher co-morbidity cost score appear to have rates of approximately1.5 percent, 5.8 percent and 10.1 percent.

Dr. Arterburn concluded by saying that, “The results of this study should inform discussions with patients with regard to the potential risks and benefits of bariatric surgery. These findings also suggest that the risks of bariatric surgery in patients with significant comorbidities, such as congestive heart failure, complicated diabetes and chronic obstructive pulmonary disease, should be carefully weighed against potential benefits in older male patients and those with superobesity.”

Bariatric procedures may perhaps be technically more complicated in these patients because of their abdominal fat. In addition, they may be at an increased possibility for wound complications and blood clotting and are prone to suffer from more obesity-related illnesses.

The study findings revealed that in general, a total of 54 patients i.e. 6.3 percent appear to have died during the follow-up period whereas 1.3 percent of the patients died 1 month after surgery. Moreover, 2.1 percent seemed to have died 90 days after surgery and about 3.4 percent had died after one year. The study authors were of the opinion that numerous potential explanations could possibly exist for the increased risk of death among the superobese.

The findings of the study have been published in the Archives of Surgery.