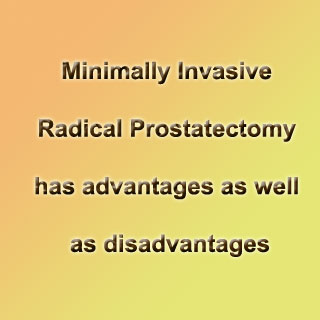 A new study signifies that the use of minimally invasive procedures including the utilization of robotic assistance for radical prostatectomy, which have augmented considerably in recent years, may cut down hospital stays and reduce respiratory and surgical complications, but may also lead to an increased rate of particular complications, counting incontinence and erectile dysfunction.

The authors commented, “Moreover, the widespread direct-to-consumer advertising and marketed benefits of robotic-assisted MIRP in the United States may promote publication bias against studies that detail challenges and suboptimal outcomes early in the MIRP learning curve. Until comparative effectiveness of robotic-assisted MIRP can be demonstrated, open RRP, with a 20-year lead time for dissemination of surgical technique relative to MIRP, remains the gold standard surgical therapy for localized prostate cancer.”

Jim C. Hu, M.D., M.P.H., of Brigham and Women’s Hospital, Boston, presented the results of the study at a JAMA media briefing in Chicago.

The authors mentioned, “However, men undergoing MIRP vs. RRP experienced more genitourinary complications [involving the genital and urinary organs or their functions; 4.7 percent vs. 2.1 percent) and were more often diagnosed as having incontinence and erectile dysfunction. The need for additional cancer therapies was similar by surgical approach.”

The experts also discovered that superior delivery of MIRP vs. RRP was linked with living in regions of higher socioeconomic status based on education and income, and that this could be the outcome of a highly successful robotic-assisted MIRP marketing campaign disseminated via the Internet, radio, and print media channels likely to be frequented by men of higher socioeconomic status.

The authors concluded by mentioning that in light of the mixed outcomes associated with MIRP, the finding that men of higher socioeconomic status opted for a high-technology alternative despite insufficient data demonstrating superiority over an established gold standard. It may be a reflection of a society and health care system enamored with new technology that increased direct and indirect health care costs but had yet to uniformly realize marketed or potential benefits during early adoption.

The study was published in JAMA, a theme issue on surgical care.