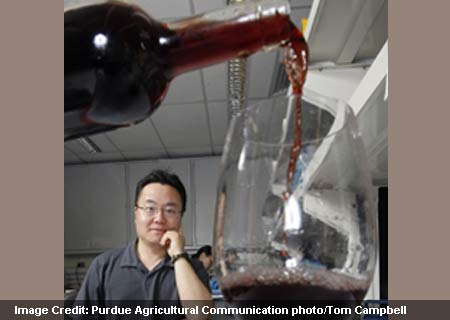 Can fighting obesity get as simple as nibbling some grapes or drinking some red wine? Well, could be as scientists from the Purdue University have shown that a compound found in red wine and certain other fruits may reduce the formation of fat cells.

This compound that resembles resveratrol is called piceatannol and seemingly has an upper hand in controlling obesity. This molecule is also known for its beneficial effects in conditions like heart disease, cancer and neurodegenerative diseases.

Kee-Hong Kim, an assistant professor of food science who reported the study along with Jung Yeon Kwon, a graduate student in Kim’s laboratory, commented, “Piceatannol actually alters the timing of gene expressions, gene functions and insulin action during adipogenesis, the process in which early stage fat cells become mature fat cells. In the presence of piceatannol, you can see delay or complete inhibition of adipogenesis.”

Basically, this compound appeared to block the cycles initiated by insulin to transform immature fat cells into full-grown ones. Not many of us know of a process called adipogenesis that is apparently responsible for fat cell accumulation in the body. Immature fat cells take about 10 days or more to fully grow and develop.

In other words, targeting this process may be one effective way of combating obesity. The complete process was demonstrated in cell culture. Thus, the team intends to affirm the findings in a research with animal models hereafter.

The report is published in the recent issue of the Journal of Biological Chemistry.