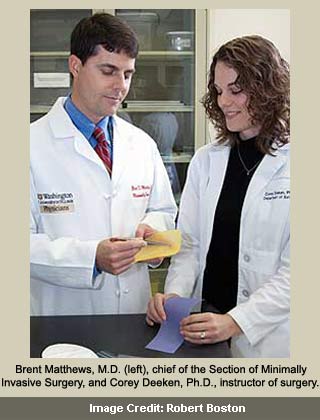 Scar-free surgery seems impossible but for Brent Matthews scar-free surgery may perhaps be a fast-approaching reality. He seems to have excelled in surgical procedures designed in order to reduce scars and recovery time.

Interestingly Matthews is believed to be on the leading edge of innovations that make already minimally invasive surgery even less invasive. It was observed that he removes patients’ gallbladders with a technique that needs only a single, small incision inside the belly button. Supposedly, the procedure leaves barely a visible scar. He is also known to be laying the foundation for abdominal surgeries performed via natural openings in the body namely the mouth or vagina instead of cuts in the belly. For patients, this latest twist on surgery could possibly mean even less pain and faster recoveries.

Brent Matthews M.D., an associate professor of surgery, chief of the Department of Surgery’s Section of Minimally Invasive Surgery stated that, “One of the big challenges of minimally invasive surgery is developing new ways to do surgeries that are already done very well. The bar is much higher today. But we think there’s still room for improvement by reducing patients’ pain, their recovery times and even the amount of scarring.”

“By nature, he’s calm and cool. Brent accomplishes so much, a lot of it behind the scenes. He brings out the best in everyone he works with. He’s a fantastic mentor — medical students and residents love him,” says Timothy Eberlein, M.D., the Bixby Professor and chairman of the Department of Surgery, the Spencer T. and Ann W. Olin Distinguished Professor and director of the Siteman Cancer Center.

In his own days as a medical student, Matthews was noted to have witnessed a revolution in surgery take shape. He stood alongside surgeons removing a patient’s gallbladder, but not with the usual 10-inch incision extending from the rib cage to the belly button. The surgeons seem to have made several half-inch incisions in the patient’s abdomen via which they passed miniaturized instruments and a high-resolution video camera. Their movements appear to have been guided by video images displayed on monitors in the operating room.

Matthews further said that, “It was overwhelming and exciting. I felt like there were no limits to what could be developed. This was the future of surgery, and I wanted to be a part of it.”

It was noted that since then, laparoscopy has replaced traditional, open surgeries for removing the gallbladder and appendix and repairing hernias. Moreover, it has become increasingly common for bariatric procedures in order to treat gruesome obesity and for gynecologic and urologic surgeries. Supposedly, the smaller incisions have considerably reduced patients’ pain and their recovery time.

Currently, surgeons like Matthews are believed to be pushing the envelope even further by moving towards ‘scarless’ procedures. However he claims that it’s not just a matter of deciding that something is cool and offering it to patients. Part of the process of introducing novel procedures appears in determining when the technology is suitable and for which patients.