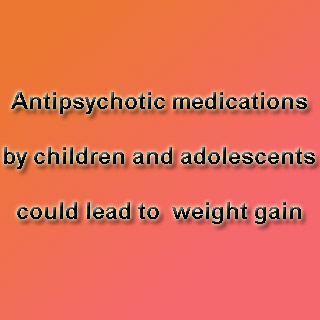 Obesity has several factors associated with it. Well, one more reason is now claimed to be due to the use of antipsychotic medications by children and adolescents. A study alleges that several pediatric and adolescent patients who were given second-generation antipsychotic medications apparently gained considerable weight, post medication. They also experienced varied unfavorable effects on cholesterol and triglyceride levels and other metabolic measures.

Second-generation antipsychotic medications are frequently given in the treatment of psychotic disorders, bipolar disorder, and nonpsychotic mental disorders for children and adolescents in the United States.

The authors commented, “Increasingly, the cardiometabolic effects of second-generation antipsychotic medications have raised concern. Cardiometabolic adverse effects, such as age-inappropriate weight gain, obesity, hypertension, and lipid and glucose abnormalities, are particularly problematic during development because they predict adult obesity, the metabolic syndrome, cardiovascular morbidity, and malignancy.”

The cardiometabolic effects of these medications have apparently not been adequately examined in children and adolescent patients who have not earlier received them. Thee authors provided this as background information.

For the study of weight and metabolic changes, Christoph U. Correll, M.D., of Zucker Hillside Hospital, North Shore-Long Island Jewish Health System, Glen Oaks, and The Feinstein Institute for Medical Research, Manhasset, New York examined around 272 pediatric patients, from age 4 -19 years, who had earlier not been given antipsychotic medication. It was seen that around 47.8 percent of the patients apparently suffered from mood spectrum, 30.1 percent of the patients had schizophrenia spectrum and 22.1 percent of patients with disruptive or aggressive behavior spectrum disorders. Around 15 patients who declined participation or were non-adherent to medications provided as a contrast group. For around 12 weeks, patients were treated with antipsychotic medications aripiprazole, olanzapine, quetiapine, or risperidone.

After a median of 10.8 weeks of treatment, it was seen that weight apparently rose by an average of 18.7 lbs. Around 45 patients were given olanzapine and their weight seemed to increase by 13.4 lbs. About 36 patients who received quetiapine had their weight supposedly increased by 11.7 lbs. Around 135 patients were given risperidone and their weight apparently rose by 9.7lbs. Approximately 41 people received aripiprazole and it was compared with a minimal weight change of 0.4 lbs. Some 15 people were present in the untreated group.

The authors observed, “Each antipsychotic medication was associated with significantly increased fat mass and waist circumference. Altogether, 10 percent to 36 percent of patients transitioned to overweight or obese status within 11 weeks.”

The authors mentioned, “With risperidone, levels of triglycerides increased significantly. Metabolic baseline-to-end-point changes were not significant with aripiprazole or in the untreated comparison group. Patients receiving quetiapine had modestly higher incidence rates of hyperglycemia and the metabolic syndrome and patients receiving olanzapine experienced the highest incidence rates.”

The authors observe that these outcomes are concerning as they contain fat mass and waist circumference, which are supposedly linked with the metabolic syndrome in adults treated with antipsychotic medications and heart disease in the common population.

The authors concluded by mentioning that in view of poor physical health outcomes and suboptimal metabolic monitoring in the severely mentally ill, the benefits of second-generation antipsychotic medications must be balanced against their cardiometabolic risks through a careful assessment of the indications for their use, consideration of lower-risk alternatives, and proactive adverse effect monitoring and management.