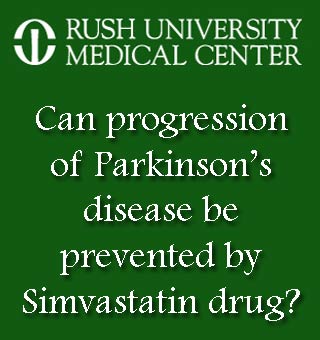 A commonly used cholesterol-lowering drug, called simvastatin, could possibly prevent progression of Parkinson’s disease. Atleast this is what a novel study by neurological scientists at Rush University Medical Center claims.

Parkinson’s is known to be a slowly progressive disease that affects a small area of cells within the mid-brain known as the substantia nigra. Gradual degeneration of these cells may cause a decrease in dopamine, which is an essential chemical neurotransmitter. Apparently, the decrease in dopamine leads to one or more of the classic signs of Parkinson’s disease. These signs are believed to include, resting tremor on one side of the body, generalized slowness of movement, stiffness of limbs, and gait or balance problems.

Though 15 percent of patients are diagnosed before age 50, it seems to be usually considered a disease that targets older adults which affects one of every 100 persons over the age of 60. This disease appears to be to some extent more prevalent in men as compared to women.

For the purpose of the study, the experts analysed the use of the FDA-approved medication in mice with Parkinson’s disease. They found that the drug seems to have effectively reversed the biochemical, cellular and anatomical changes caused by the disease.

Study author Kalipada Pahan, PhD, professor of neurological sciences at Rush University Medical Center stated that, “Statins are one of the most widely used cholesterol-lowering drugs throughout the world. This may be a safer approach to halt the disease progression in Parkinson’s patients.”

“Understanding how the disease works is important to developing effective drugs that protect the brain and stop the progression of Parkinson’s. If we are able to replicate these results in Parkinson’s patients in the clinical setting, it would be a remarkable advance in the treatment of this devastating neurodegenerative disease,” elucidates Pahan.

The study authors have revealed that the activity of one protein called p21Ras appears to get increased very early in the midbrain of mice with Parkinson’s pathology. Simvastatin is known to enter into the brain and block the activity of the p21Ras protein and other associated toxic molecules. Furthermore, it may perhaps go on to protect the neurons, normalize neurotransmitter levels, and in turn improve the motor functions in the mice with Parkinson’s.