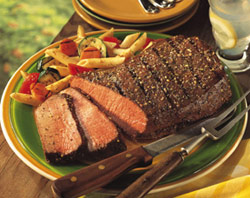 Two new studies have suggested that eating red meat may raise a woman’s risk of a common type of breast cancer. One study found that women who ate more than 1 1/2 servings of red meat per day were almost twice as likely to develop hormone-related breast cancer as those who ate fewer than three portions per week.

The other study happened to be one of the longest and largest tests of whether supplements of various vitamins can prevent heart problems and strokes in high-risk women. This study found that vitamins do no actual good, although there were hints that women with the highest risk might get some benefits from the intake of vitamin C.

This is the first large study to test vitamin C alone, not in combination with E or other vitamins, for heart health, said Dr. JoAnn Manson, chief of preventive medicine at Harvard-affiliated Brigham and Women’s Hospital in Boston, who led the research.

More than 8,000 women were randomly assigned to take vitamin C, E or beta carotene alone or in various combinations for nearly a decade. An additional 5,442 women took folic acid and B vitamin supplements for more than seven years.

“Overall, there was minimal evidence of any cardiovascular benefit of any of these antioxidants,” and people should not start or continue taking them for that purpose, Manson said.

Among the 3,000 women in the study who had no prior heart disease but three or more risk factors for it, those who received vitamin C alone or in combination had a 42 percent lower risk of stroke. Smokers taking C also had a 48 percent lower risk.

Vitamin E may give very small benefits for some women, the study suggests. Those with prior heart disease had a 12 percent reduction in the risk of new heart problems, Manson said.

“Many of these subgroup findings are intriguing. However, they need to be confirmed in other studies,” Manson said. “We don’t want this to be interpreted as a conclusive finding.”

What does appear conclusive is that folic acid and B vitamins “are not effective as preventive agents,” said Dr. Christine Albert, who presented that portion of the study at the heart meeting on Monday. These nutrients lower homocysteine, a blood substance thought to increase heart disease risk, but many studies now call the importance of that into question.

The meat study was based on observation rather than an experiment. The Nurses’ Health Study tracked the diets and health of more than 90,000 women who were 26 to 46 years old when they enrolled roughly two decades ago.

They filled out diet questionnaires in 1991, 1995 and 1999, and were divided into five groups based on how much red meat they said they ate. Researchers checked on their health for 12 years on average and confirmed breast cancer diagnoses with medical records.

Meat consumption was linked to a risk of developing tumors whose growth was fueled by estrogen or progesterone – the most common type – but not to tumors that grow independently of these hormones.

The women who ate more red meat were more likely to smoke and be overweight, but when the researchers took those factors into account, they still saw that red meat was linked with an increased risk of breast cancer.