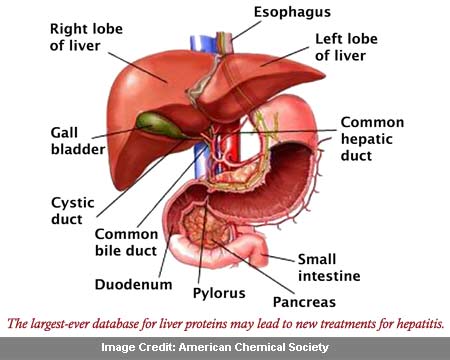 A group of scientists from about 11 study centers in China have reported for the foremost time a collection of the largest-ever database about the proteins produced by genes in a single human organ.

According to them, the liver, and their massive database in both protein and record levels may lead to novel biomarkers and treatments for liver disease. Also, it could include treatments for hepatitis and liver cancer, which is at outbreak levels in China and affects millions of people worldwide.

The authors pointed out that the liver seems to play several crucial roles in the body. For instance, it is known to produce digestive enzymes, hormones, most of the proteins in the blood, storing carbohydrates for use in supplying energy to the muscles, activates and breaks down drugs. In spite of this key role, huge gaps may possibly exist in scientific knowledge about proteins involved in these activities.

For the purpose of the study, the authors were believed to have made use of 10 tissue samples of healthy liver from volunteers. Moreover, they seem to have identified nearly 6,788 non-redundant proteins in the liver samples. Apparently, this is the largest group of proteins ever recognized by scientists in any human organ.

Also, about half of the proteins appear to have never been earlier noticed in the human liver. One interesting and unexplained discovery is that many of the new-found proteins could be related to diseases in the nervous system.

This study is known to be a part of the China Human Liver Proteome Project, which was officially launched by the Ministry of Science and Technology of China (MOST). In addition, the earlier study was noted to have been chaired by Fuchu He.

The findings of the study ‘First Insight into the Human Liver Proteome from PROTEOMESKY -LIVERHu 1.0, a Publicly Available Database’ have been published in ACS’ Journal of Proteome Research.