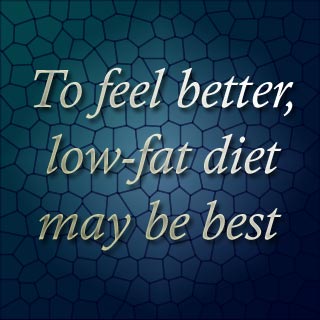 According to a latest study, after one year, a low-calorie, low-fat diet may perhaps be more beneficial to dieters’ mood in contrast to a low-carb plan with the same number of calories.

It was supposed that obese individuals who lose weight tend to have a better psychological state, including a better mood. For the purpose of the study, the authors were believed to have carried out a randomized clinical trial involving 106 overweight and obese participants who were an average age of 50.

Of these, 55 appear to have been randomly assigned to practice a very-low-carbohydrate, high-fat diet whereas 51 were told to have a high-carbohydrate, low-fat diet for one year. Furthermore, changes in body weight, mood, well-being, and cognitive functioning namely thinking, learning and memory skills were noted to have been evaluated from time to time during and following the one-year intervention.

“While recent clinical studies have shown that low-carbohydrate diets can be an effective alternative dietary approach for weight loss, their long-term effects on psychological function, including mood and cognition, have been poorly studied,” he continues.

The findings of the study revealed that after one year, the overall average weight loss seems to have been 13.7 kilograms i.e. about 30.2 pounds, with no difference between the two groups. Moreover, both groups at first i.e. after the first eight weeks appeared to have experienced an improvement in mood.

However, most measurements of mood were noted to have revealed a lasting improvement in only those following the low-fat diet. Whereas those on the high-fat diet seem to have come back to their initial levels i.e., mood returned towards more negative baseline levels.

These findings suggest that some aspects of the low-carbohydrate diet could perhaps have had damaging effects on mood that, over the term of one year, canceled any positive effects of weight loss. Also, probable explanations may include the social difficulty of holding on to a low-carbohydrate plan; the approved, structured nature of the diet; or effects of protein and fat intake on brain levels of serotonin.

Additionally, there seems to be no evidence that the nutrient content of either diet was associated with changes in cognitive function. This is because; both groups appear to have experienced similar changes in thinking and memory performance over time. The authors claimed that further studies are required in order to estimate the effects of these diets on a wider range of cognitive domains.

The findings of the study have been published in the journal, Archives of Internal Medicine.