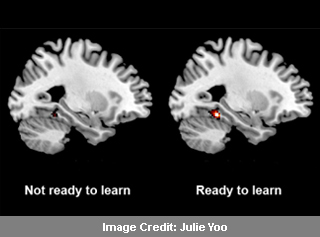 Is it that only when the brain is ready, we have a better memory? Well, MIT scientists have shown that responses of a specific portion of the brain called the parahi-ppocampal cortex (PHC) seem to suggest the extent of recalling a visual scenario.

As part of the study, individuals were presented 250 color images of indoor and outdoor instances through an fMRI scanner. The team then showed them 500 scenes apart from the 250 they already visualized, as a trial for gauging their reminiscence. As per the outcomes, if the PHC was not preoccupied when the images appeared before the participants, then they seemingly remembered them better. The exact region varied with persons but was apparently located in the PHC.

Gabrieli, the Grover Hermann Professor of Health Sciences and Technology and Cognitive Neuroscience and a principal investigator at the McGovern Institute for Brain Research at MIT shared, “When that area is busy, for some reason or another, it’s less ready to learn something new.”

PHC is known to be an essential component of the brain associated with memory formation. This analysis basically puts forth that PHC activity prior to the appearance of any visual seems to affect how efficiently the instance can be brought back to mind. For the second trial, the scientists used real-time fMRI which can inspect brain condition of subjects at regular intervals. Precisely, the device will comprehend the time when the brain is ‘ready’ or ‘not ready’ to remember pictures. These states apparently boosted the arrival of new visual photos.

The results showed that the brain supposedly recollected better when the brain was in the ready state. These revelations may explain why some things are summoned back to mind easily than others. According to Turk-Browne, the above tests show that besides the inherent capability of memory and efficacy of recalling systems, there also appears to be a lot of influence by the degree of a person’s preparedness for visualizing the scene. This knowledge will help to measure the amount of reciprocity to learning or readiness for the same.

The findings are published in the journal NeuroImage.