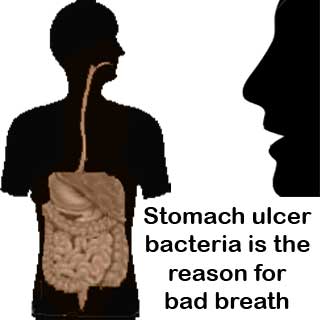 The mouth is believed to be containing around 600 different species of bacteria’s, some out of which can cause disease. One of these is the helicobacter pylori. This is believed to be responsible for stomach ulcers and also for other gastric cancers. Scientists reckon that around 20 to 80 percent and 90 percent people carry this bacterium in the developed and developing countries respectively.

Dr. Nao Suzuki from the Fukuoka Dental College, Japan says that, “Recently, scientists discovered that H. pylori can live in the mouth. We wanted to determine whether the bacteria can cause bad breath, so we tested patients complaining of halitosis for the presence of H. pylori.” Dr. Suzuki further says, “Halitosis is a common problem in humans, and bad breath is largely caused by periodonitis, tongue debris, poor oral hygiene and badly fitted fillings. Bacteria produce volatile compounds that smell unpleasant, including hydrogen sulphide, methyl mercaptan and dimethyl sulphide. Doctors often measure the levels of these compounds to diagnose the problem. Gastrointestinal diseases are also generally believed to cause halitosis.”

These scientists found this bacterium residing in the mouth of 21 out of more than 300 Japanese people with halitosis. In these people the concentration of a bad breath gas and the level of oral disease were higher. In patients suffering with periodontal (gum) disease, 16 out of 102 people had H. pylori in their mouth.

It is said that patients carrying H. pylori had more blood in their saliva. They were also found to be carrying one of the major periodontal bacteria, Prevotella intermedia.

Dr. Suzuki says that H. pylori in association with periodontal disease causes bad breath and not on its own. The connection between H. pylori residing in the mouth as well as in the stomach needs to be analyzed. Dr. Suzuki hopes to soon be able to uncover the role played by the mouth in spreading H. pylori stomach infection.