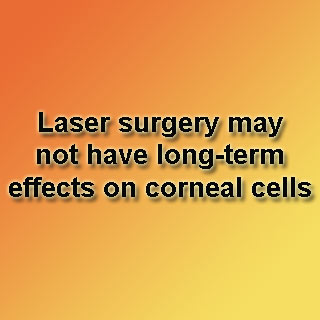 A study claims that laser eye surgery which rectifies vision problems apparently does not seem to be linked to permanent changes to cells coating the inside of the cornea at nine years following the procedure.

Two types of laser surgery-photorefractive keratectomy (PRK) and laser in situ keratomileusis (LASIK)-are believed to be frequently utilized to rectify refractive errors like near-sightedness. This was mentioned as background information. Supposedly not much is known as to how these trials impact the cornea on a cellular level over long years.

Sanjay V. Patel, M.D., and William M. Bourne, M.D., of Mayo Clinic, Rochester, Minn. examined about 29 eyes of 16 patients who had experienced LASIK or PRK. Images of the cells coating the cornea i.e. endothelial cells were apparently taken and inspected before and nine years post surgery. The yearly pace of corneal endothelial cell loss in the eyes of patients who had surgery was matched against those of 42 eyes that had not experienced either procedure.

It was seen that nine years following surgery, the thickness of cells coating the cornea had supposedly reduced by 5.3 percent from their preoperative state. Nevertheless, the standard yearly speed of cell loss i.e. 0.6 percent was apparently alike in corneas of eyes that were operated on and those that were not.

The authors commented, “Our results support the findings of numerous short-term studies that found no significant endothelial cell loss after LASIK and PRK. The importance of the findings in our study relates to using corneas that have undergone LASIK or PRK as donor tissue.”

This study appears in the Archives of Ophthalmology, one of the JAMA/Archives journals.