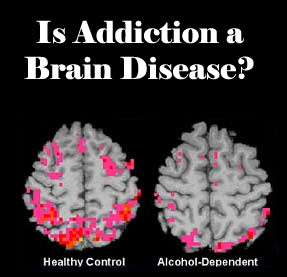 Can addiction be considered as a brain disease? If researchers are to be believed, the answer to this question is yes, solely because being addicted to something changes the way the brain functions.

A team of international researchers has carried out a study and has found that alcoholics and drug addicts are naturally more impulsive when compared to other normal people.

According to lead researcher of the study Charlotte Boettiger of the University of North Carolina, “Their (the addicts’) brains may not fully process the long-term consequences of their choices.”

The researchers carried out the brain scans on nine sober recovering alcoholics.

The participants were given financial decision tasks that allowed them to choose “less money now” or “more money later”. The addicts hose the “now” reward almost three times as often.

The team concluded that the participants had less activity in the orbital frontal cortex- the part of the brain that helps people make wise long-term decisions- than volunteers who had no history of addiction.

The researchers also found a genetic link with the brain chemical dopamine. They believe that raising dopamine levels may be a treatment for addiction.