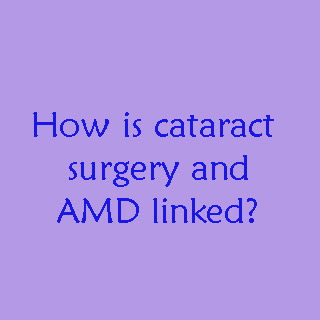 Cataract is claimed to be one of the top causes of blindness globally and age-related macular degeneration (AMD) is said to be the principal cause of blindness among Americans who are 65 and older. Surgery is believed to be the most effectual and general vision-restoring treatment for cataract.

Bearing the topic in mind, age-related macular degeneration apparently does not seem to develop at a higher rate among people who have had surgery to treat cataract as opposed to preceding reports that treating one cause of vision loss could deteriorate the other. This was claimed by a latest study.

The authors mentioned that since both conditions are strongly age-related, many individuals with cataract also have AMD. There has been a long-standing controversy among clinicians as to whether cataract surgery is contraindicated in eyes with non-neovascular AMD.

The authors further added, “A major concern has been whether cataract surgery increases the risk of progression to neovascular AMD [an advanced form of the disease involving formation of new blood vessels] in eyes at risk of progression such as those with intermediate AMD.”

For the study, eyes of around 108 people suffering from non-neovascular AMD who went through preoperative evaluations for cataract surgery between 2000 and 2002 were examined by Li Ming Dong, Ph.D., of Stony Brook University School of Medicine, N.Y., and colleagues. Images of the retina were taken and fluorescein angiography, which utilizes a particular dye to inspect blood vessels in the eye, was apparently conducted. A sum of around 86 people assessed were showed eyes suffering from non-neovascular AMD prior to surgery, and around 71 had follow-up evaluations between one week and one year following surgery.

Neovascular AMD was apparently seen in roughly 9 of these 71 eyes at one or more follow-up evaluations. About 5 eyes supposedly exhibited indications of neovascular AMD at the one-week follow-up point; the size and location of the lesions identified indicated that they may have been present prior to surgery but not noticeable owing to the opaque lens caused by cataract.

When these eyes and one eye that did not have one-week follow-up photographs accessible were debarred, the growth rate between one week and one year apparently reduced to 3 of 65 eyes. The rate of development to neovascular AMD was supposedly alike among subjects’ other, cataract-free eyes over the same duration. This was seen in one eye.

The authors concluded by stating that their findings do not support the hypothesis that cataract surgery accelerates the progression of AMD.

The study was published in the November issue of Archives of Ophthalmology, one of the JAMA/Archives journals.

Severe hip pain may be treated with ultrasound-guided cortisone injections