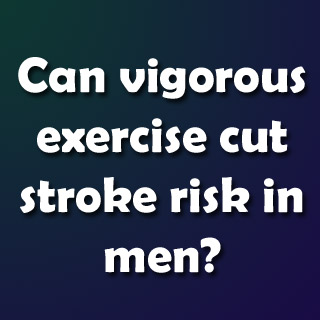 It is said that physical exercise is very important for our health and well being. Adding to it, a latest study has found that men who often take part in moderate-to-heavy intensity exercise are less prone to suffer from a stroke as compared to people who get no exercise or only light exercise. Supposedly, moderate-to-heavy intensity exercise includes jogging, tennis or swimming whereas light exercise consists of walking, golfing, or bowling.

However, exercise may perhaps not have a protective effect against stroke for women. For instance, women who took part in moderate-to-heavy intensity exercise did not have a reduced risk of stroke. Stroke is known to be the leading cause of disability and the third-leading cause of death in the United States.

The study was believed to have involved 3,298 people living in northern Manhattan, NY, with a standard age of 69 who were followed for about nine years. The authors found that during that time, there appeared to be 238 strokes. A total of 41 percent of the participants were noted to have reported that they participated in no physical activity. Moreover, twenty percent seemed to have regularly participated in moderate-to-heavy intensity activities.

Study author Joshua Z. Willey, MD, of Columbia University Medical Center and New York Presbyterian Hospital at Columbia and a member of the American Academy of Neurology said that, “Taking part in moderate-to-heavy intensity physical activity may be an important factor in preventing stroke. A large percentage of the participants were not taking part in any physical activities. This may be true of many elderly people who live in cities. Identifying ways to improve physical activity among these people may be a key goal for public health.”

The findings of the study revealed that men who participated in moderate-to-heavy intensity activities appear to have been nearly 63 percent less likely to have a stroke in contrast to people with no physical activity. Furthermore, the baseline risk of ischemic stroke over five years in the entire group was apparently 4.3 percent. Additionally, among those with moderate-to-heavy intensity activities the risk could have been approximately 2.7 percent whereas amongst those with no activity, it was 4.6 percent.

These findings appear to have been opposing to some other studies that found that even light intensity physical activity reduced the risk of stroke. Willey claimed that the number of participants may not have been big enough to detect subtle dissimilarities in the group that took part in only light physical activity.