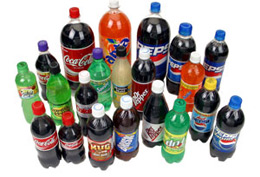 The latest research by a British scientist has shown that a preservative used in cola drinks could switch of vital parts of DNA, causing serious damage to cells particularly in children.

For decades now Sodium Benzoate or E211 has been used as a preservative by carbonated drinks industries worldwide. It is used to kill yeast, bacteria and fungi in soft drinks, jam, fruit juice and salad dressing. When mixed with vitamin C it forms benzene, a carcinogenic substance.

Peter Piper, a molecular biology expert at Sheffield University studied the preservative and found that it could damage an important part of DNA called mitochondria.

“These chemicals have the ability to cause severe damage to DNA in the mitochondria to the point that they totally inactivate it, they knock it out altogether,” said Piper.

“The mitochondria consume the oxygen to give you energy and if you damage it then the cell starts to malfunction very seriously,” he said.

“And there is a whole array of diseases now being tied to damage to this part of DNA. Parkinson’s and quite a lot of neuro-degenerative diseases, but above all the whole process of ageing can be caused by the damage,” added Piper.

However, makers of drinks like Coca-Cola, Fanta and Diet Pepsi insisted that experts had rigorously assessed the additive before it had been approved for use.

Coca-Cola said all their ingredients have been approved as safe by the food regulatory authorities in Britain and the European Union (EU), from where they take their guidance.

A spokesman for Britvic, which makes Diet Pepsi said, “We will only use ingredients that are thoroughly tested and approved for use by the Food Standards Agency (FSA) in Britain and approved by the EU.”

Piper claimed that tests on sodium benzoate carried out by the European Union and the US Food and Drug Administration were too old to be reliable, the online edition of the Daily Mail reported Sunday.

“By the criteria of modern safety testing, the safety tests were inadequate,” he said.

“Like all things, safety testing moves forward and you can conduct a much more rigorous safety test than you could 50 years ago. My concern is for children who are drinking large amounts,” said Piper.

In India, the New Delhi based Centre for Science and Environment (CSE) had earlier tested Pepsi and Coca-Cola products and had announced that it found four toxic residues after testing 12 of their major brands.

“Some of these residues were carcinogenic,” claimed CSE director Sunita Narain. As a result OF CSE’s report, several states including the communist government led Kerala had banned cold drinks manufactured by Pepsi and Coca Cola in their state.

England is among the lowest breastfeeding country in Europe