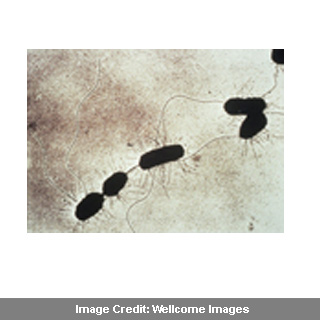 Scientists have seemingly recognized a ‘switch’ that facilitates Salmonella bacteria to incapacitate host cells. The new discovery could one day result in drugs that seems to obstruct with the switch so as to battle Salmonella and perhaps other bacterial infections.

In humans, Salmonella seems to cause diseases ranging from gastroenteritis to typhoid fever. Apparently, it also causes comparable diseases in livestock. Before Salmonella could ascertain an infection, the bacterium should first impair a bigger human or animal cell host cell where it may be able to duplicate. It seems to do this by inserting a cocktail of ‘virulence’ proteins into the host cell, which appears to impede with the cell’s defences and aid the bacteria to develop.

Once the hole is developed, the bacterial cell appears to detect the acidity of the host cell and this turns off the safety catch. The virulence proteins supposedly can then be transported via the hole so as to commandeer the host cell.

Lead author of the study, Professor David Holden from the Department of Medicine at Imperial College London, commented, “The way in which a Salmonella cell delivers its virulence proteins to a host cell is a bit like the way in which a parked aeroplane delivers its passengers to a terminal building. After the plane taxis to its stand at the terminal, a loading bridge is used to connect the plane to the building. Similarly, the bacterial cell waits until it has assembled a special bridge before it delivers its passengers – the virulence proteins – to the host cell.

He added, “On a plane there’s a safety catch to prevent the doors opening before the bridge is ready, to stop the passengers falling out onto the tarmac. Similarly, the bacterial cell holds back delivery of its proteins using a molecular safety catch, until it senses that the pore has been assembled. Then the safety catch switches off, and virulence proteins can be delivered in an orderly manner. This process is crucial for Salmonella because if it cannot deliver these proteins properly it cannot establish an infection.”

The study authors highlight that the study is presently at an early stage. But they anticipate that eventually, it could be feasible to use their findings to plan better drugs or vaccines to fight Salmonella-related diseases.

The study was published in the journal Science.