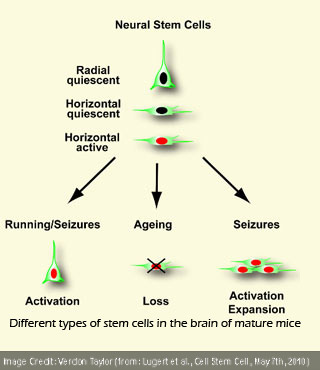 Right after birth, during the entire lifetime, the brain seems to loose many nerve cells. Also, most neurons are formed before birth, after which many excess neurons degenerate. But, there are some cells that are probably still capable of division in old age too, at least in the brains of mice, claimed the scientists from the Max Planck Institute of Immunobiology in Freiburg.

The report revealed that, different types of neuronal stem cells exist that can create new neurons. They divide continuously and create new neurons in young animals. At the same time, a major proportion of the cells in older animals continue to remain inactive. But the production of new cells can be reactivated. This can possibly be done, through physical activity or epileptic seizures. The research suggests that, since it is possible in mice it may be possible in humans too, because neurons that are capable of dividing also occur in the human brain into adulthood.

However, this suggestion is probably retaliated from earlier beliefs which claim that the brain loses learning and memory capacity, with advancing age. But, neuronal stem cells exist in the hippocampus, a region of the brain that possibly plays an important role in learning and memory functions. This region can possibly produce new nerve cells throughout life. The tests conducted on mice, apparently showed that the existing network, amalgamated the newly formed cells. They seemed to be very beneficial in the learning capacity of animals too. But, as age increased, the formation of these new cells may be receded. However, the reasons for this were not known up till now.

The Freiburg investigators, along with colleagues from Dresden and Munich claim that, they have acquired success in determining the reason, for why lesser neurons are formed in the adult mouse brain. Apparently, they managed to analyze the different populations of neuronal stem cells. This further displayed that, the hippocampus has active and inactive or dormant neuronal stem cells.

Verdon Taylor from the Max Planck Institute of Immunobiology, explained, “In young mice, the stem cells divide four times more frequently than in older animals. However, the number of cells in older animals is only slightly lower. Therefore, neuronal stem cells do not disappear with age but are kept in reserve.”

But the factors that influence the reactivation of dormant stem cells may not be known accurately. It is possible that, the cells can stimulate and divide again. The authors noticed more newborn hippocampal neurons in physically active mice, than in their inactive counterparts. Therefore, Verdon suggested that running encourages the formation of new neurons. Physicians assume that, epileptic seizures, also promote the division of neuronal stem cells.

Under the microscope, the various stem cell populations can be easily categorized. Cells that lie perpendicular to the surface of the hippocampus may form the first group. But almost all these radial stem cells are inactive. The group of horizontal stem cells includes cells, whose orientation runs parallel to the hippocampus surface. In opposition, over 80 percent of the cells, in the group of horizontal stem cells seem to consistently form new cells. Although the remaining 20 percent, are inactive it is possible that they occasionally become activated. The activity of genes such as Notch, RBP-J and Sox2 is possibly common to all the cells.

Radial and horizontal stem cells do not seem to share, a similar arrangement and also may react to different stimuli. It has apparently been analyzed that, once the animals are physically active, some radial stem cells become active and begin to divide. But this isn’t the same, when it comes to the horizontal stem cells. Therefore, radial cells divide when the mice are active. But, horizontal cells are aroused by epileptic seizures.

It has been probably believed that, humans too share identical hippocampus, as neuronal stem cells are found, in the brains of not only mice but also humans. Therefore, the investigators believe that, the various active and dormant stem cells arise in the human brain too. It is therefore claimed that, inactive stem cells in humans can also be activated in a similar way, to inactive stem cells in mice. Verdon further shared that, it is possible that the excessive formation, of new neurons plays a role in epilepsy. Using neuronal brain stem cells in the treatment of brain injuries or degenerative diseases like Alzheimer’s may also be possible one day.

The research was presented on May 7, 2010 in Cell Stem Cell.