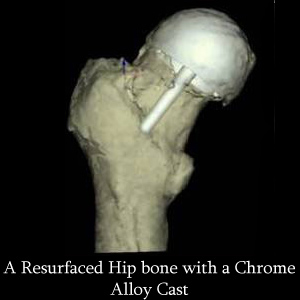 A new robotic surgical assistance that can guide inexperienced surgeons in carrying out hip surgeries will be showcased at the British Society for Computer Aided Orthopedic Surgery Conference. Known as the Acrobot Navigation, this robot “makes hip operations so simple that even medical students can get good results.” Precisely, the new surgical system made medical undergrads three times more accurate during practice hip operations.

Professor Justin Cobb, Head of the Biosurgery and Surgical Technology Group at Imperial College London, conducted the trial on 32 undergraduate medical students at Imperial College London from December 2006 to December 2007. The pilot study tested whether planning before an operation, combined with the latest navigation equipment could increase the success rates of students practicing hip resurfacing arthroplasty procedures – a method for correcting painful hip bone deformities by coating the femoral head with a cast of chrome alloy.

Hip resurfacing operations are technically demanding and require a lot of precision and accuracy. In fact, surgeons require years of experience and also rely on different cameras, lasers and hand held tools to assist them in navigation during the operation.

Inexperienced surgeons and medical undergraduates often face a steep learning curve to gain the experience necessary to carry out hip resurfacing operations. Until now, this could only be gained through repeatedly performing the operations. This could cause problems because if hip bones are repaired inaccurately, wear and tear occurs, requiring the patients to undergo further painful and expensive corrective operations.

The Acrobot Navigation is similar to a GPS tracking system. It helps the user to navigate during surgery by plotting correct surgical incisions. It also calculates the correct angles for inserting chrome alloy parts needed to repair hip bones.

It has twin digital arms protruding from a console. One senses the movement of surgical tools as they slice through a patient’s hip area. The other takes detailed images of the bones. This information is fed into software which generates a virtual model of a patient’s hip as it is being operated on. Similar to a 3D roadmap, it allows the user to plot the progress of an operation as they are performing it – a vital technique for ensuring that it is being carried out correctly.

“Our research proves that we can take untrained surgeons and make them an expert in a new technique rapidly. More importantly, we’ve also demonstrated that no patient has to be on an inexperienced surgeon’s learning curve. This could significantly improve a patient’s health and wellbeing and ensure they do not have to undergo repeat operations,” said Professor Justin Cobb, Head of the Biosurgery and Surgical Technology Group at Imperial College, London.

Professor Cobb saw the benefits of incorporating the navigation system into undergraduate training and developed a three step training programme.