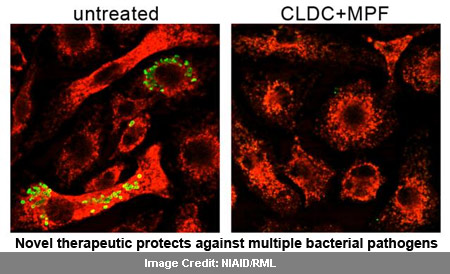 Tularemia also known as rabbit fever is an extremely contagious disease of rodents and is sometimes transferable to people. The National Institute of Allergy and Infectious Diseases (NIAID) recently revealed the introduction of a unique treatment which protects mice from infection of the bacterium that causes this disease. Experiments were also conducted with human immune cells and the treatment supposedly protected against three other types of disease-causing bacteria.

It should be noted that the bacteria’s were quite identical to the tularemia bacteria, occurred naturally and appeared to be poisonous agents of bioterrorism. The experimental treatment activates the host immune system and they in turn may destroy all the attacking microbes. On the other hand, antibiotics directly harm the attacking bacteria and may prove to achieve resistance to the prescribed medications. The novel treatment promises to support antibiotics and act like a substitute.

“A therapeutic that protects against a wide array of bacterial pathogens would have enormous medical and public health implications for naturally occurring infections and potential agents of bioterrorism. This creative approach is a prime example of public-private partnerships that can facilitate progress from a basic research finding to new, desperately needed novel therapeutics,” affirmed Anthony S. Fauci, M.D., director of the National Institute of Allergy and Infectious Diseases (NIAID) at the National Institutes of Health.

During the research, components separated from the membrane of a weakened strain of Francisella tularensis, which is assumed to be the agent of tularemia were integrated with the Juvaris product CLDC (cationic liposome DNA complexes). A natural antibacterial mechanism, called reactive oxygen species (ROS) and reactive nitrogen species (RNS) were determined to be aroused in immune cells that ingest bacteria due to this integration.

It is believed that ROS and RNS not only attack and kill the disease causing bacteria, but may also prevent it from replicating and disabling pathogens to extend to other cells. Mice with tularensis infection were provided with treatment and analyzed. It then appeared that 60 percent of mice seeking medication for the infection from three days survived lethal pulmonary infection with virulent F. tularensis. No survival was monitored among the mice which were given the bacterial components or the adjuvant alone.

Dr. Bosio quoted, “We are continuing to improve the versatility of this treatment as an antibacterial therapeutic with respect to timing of delivery and efficacy. Meanwhile, CLDC plus membrane protein fractions is proving to be an excellent tool to determine how to safely and successfully stimulate the body’s own antibacterial army to protect itself against highly infectious invaders.”

This research highlights the importance of providing maximum protection in mouse and human cells. The treatment protects human immune cells from bacteria that cause plague, melioidosis, brucellosis and tularemia. While melioidosis is a disease that infects humans and animals due to contaminated soil and water, brucellosis is a disease spread in animals and humans coming in contact with infected animals or animal products, such as contaminated milk.

The researchers explained that the treatment displayed positive results only after the completion of the three-day treatment. A treatment of less than three days in advance could not help to protect the mice.

The research is published online in the open-access journal PLoS Pathogens.