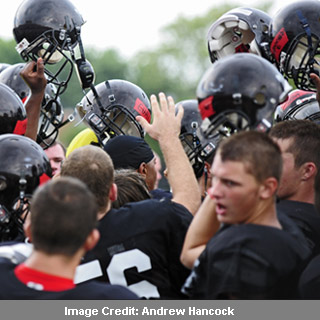 It now seems that half of all high school football players suffer some brain impairment without experiencing or being diagnosed with concussion. Scientists from the Purdue University assert that some high school football players suffer undiagnosed alterations in brain function and continue playing even though they are impaired. Apparently, sports helmet has been re-engineered to benefit soccer and hockey players.

The study was initiated on 21 players at Jefferson High School in Lafayette, Ind. Participants were made to wear helmets consisting of six sensors called accelerometers. These accelerometers relayed data wirelessly to equipment on the sidelines during each play. Investigators together termed as the Purdue Acute Neural Injury Consortium, compared impact data from each player with brain-imaging scans and cognitive tests. It was mentioned that the scans and tests were performed before, during and after the season. Video of each play was also taken to record and examine the way athletes’ sustained impacts. As a result, cognitive impairment appeared among players who were not diagnosed with concussions.

Thomas Talavage, an expert in functional neuroimaging who is an associate professor of biomedical engineering and electrical and computer engineering and co-director of the Purdue MRI Facility, and colleagues found 11 players who were diagnosed by a physician with a concussion. These players generally received high number of impacts to the head or an extremely hard impact. From the total of 11 players, while three probably developed concussions during the season, four displayed no alterations and four showed changes in brain function. It was concluded that half of the uninjured players reported alterations in brain function.

Major brain deficits were apparently found in the four players. Generally impairment concussions include precise clinical symptoms, like losing consciousness or having trouble in walking and speaking. Throughout the study significant impairment was seemingly noted. Experts affirm that football players not diagnosed with concussions often suffer cognitive impairment. Players using a GE Healthcare Signa HDx 3.0T MRI were assessed by the scientists. It was possibly initiated to conduct fMRI brain imaging along with a computer-based neurocognitive screening test.

With the help of integraded fMRI, head-based accelerometers and computer-based cognitive assessment, authors were supposedly able to identify subtle levels of neurofunctional and neurophysiological modification. The ongoing investigation can possibly help determine the number of blows that develop impairment. Having acquired this data, scientists may set accurate safety guidelines on limiting the number of hits a player receives every week. While this investigation was triggered on football players last season, scientists continue to analyze this season. The helmet-sensor data claims that undiagnosed players demonstrating no impairment received blows in many areas of the head. On the other hand, undiagnosed players showing impairment received a large number of blows usually to the top and front. This part of the brain is known to be involved in ‘working memory,’ and also visual working memory. If the helmet sensor data is to be believed then, impact forces to the head range from 20 to more than 100 Gs.

During head impacts, the brain may bounce back and forth inside the skull, further hampering neurons or surrounding tissue. The resulting trauma can probably break nerve fibers known as axons or impair signaling junctions between neurons termed synapses. Investigators claim that unlike diagnosed concussions such injuries do not affect the way to talk, ability of walking in a straight line or remember what day it is. Through the fMRI, data on brain metabolism and blood flow was observed. This information apparently pointed out most active parts of the brain while performing certain tasks. Experts compared fMRI data from before, during and after the season for showing any changes in brain activity indicating impairment.

The standard cognitive test revealed how well players were able to remember specific letters, words and patterns of lines. It was ascertained that players with concussions or with marked cognitive impairment had not yet recovered by the end of the season. Latest preliminary data claim that players can recover before the start of the next season. However, further investigations are required to determine the extent of recovery. Scientists are creating a helmet to decrease the cumulative effect of impacts and may benefit all players.

The study is published in the Journal of Neurotrauma.