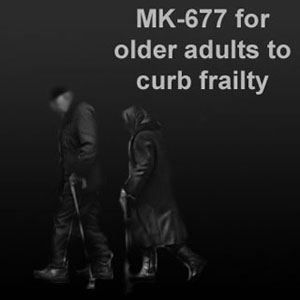 According to a latest research by the University of Virginia Health System, a daily dose of a special drug increases the muscle mass of older adults, without having any adverse side effects. This drug can be used to avoid any frailty due to aging.

The drug, MK-677, helps to increase muscle mass in the arms and legs of older adults. This is believed to be a safe and reliable way to decrease age related weakness.

Dr. Michael O. Thorner, a nationally recognized researcher of growth hormone regulation and a professor of internal medicine and neurosurgery at UVA, says that, “Our study opens the door to the possibility of developing treatments that avert the frailty of aging. The search for anti-frailty medications has become increasingly important because the average American is expected to live into his or her 80s, and most seniors want to stay strong enough to remain independent as they age.”

This study was conducted on 65 men and women aged from 60 to 81. They were studied for a period of two years. This particular study showed that those adults who took a daily single dose of the MK-677 drug, the level of growth hormone (GH) and insulin-like growth factor (IGF-I) increased, when compared to healthy young adults. This drug restored the muscle mass lost due to normal aging.

MK-677 drug resembles the action of ghrelin, a peptide that stimulates the growth hormone secretagogue receptor (GHSR). They are mainly focusing on GHSR because of the role that it plays in the regulation of growth hormone and appetite. They believe that it may be an excellent treatment target for metabolic disorders like the ones related to body weight and body composition.

According to Dr. Thorner, the UVA research formed the base of a detailed study and analysis to unveil the effect of MK-677 drug in people who get frail with age; and also to ensure its long term safety.

This study was funded by the National Institutes of Health. It was published in the Annals of Internal Medicine issue.