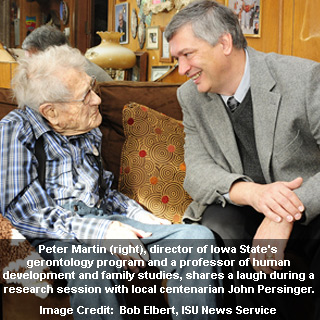 Iowa State University’s University’s gerontology program seems to have aided in recognizing what appears to envisage happiness and long life in centenarians plus what causes depression in 80-somethings and above.

In a study of 158 Georgia centenarians, the scientists discovered that past contentment with life even if it’s just remembering career achievements could be the means to happiness in our oldest years.

Peter Martin, director of Iowa State’s gerontology program and a professor of human development and family studies (HDFS), who partnered on both studies, commented, “The past is the best predictor of the future, so you’re not going to turn your life around at 85 or 90. But it’s also good to know that past accomplishments and the happiness that you had — looking back at your past — carries you through these very last years.”

For the depression study, scientists included 78 octogenarians to the happiness centenarian sample. It was seen that reduced cognitive problem-solving capability appears to be a considerable analyst of depressive symptoms in octogenarians, while living in a nursing home and bigger neurotic inclinations seemed to augment depression among centenarians.

The study authors apparently examined the subjects’ reactions to a chain of queries that seemed to evaluate their happiness, perceived health, social provisions, economic security and life satisfaction. While there appears to be no suggestion that resources affect happiness, past life fulfillment even individual accomplishments was observed to encompass a direct link. The experts advise caregivers of the elderly to execute programs counting nostalgia therapy and prearranged life review sessions to encourage feelings of happiness among extremely old populations.

They appeared to be astonished to find out that by and large cognition was not a powerful analyst of depressive symptoms at either age. It was observed that the loss of the subject’s control like problem-solving in the octogenarians, and opting for where they lived in the centenarians that seemed to dishearten them.

Martin mentioned, “In the case of the octogenarians, it’s not so much your intellectual ability as it is the ability to come up with a solution to a particular task that you used to be able to solve in your 60s and 70s. And so for the first time, you realize that there may be decline in being able to manage tasks. And at 100, it’s not so much the surrounding of the nursing home that gets you depressed. But in a nursing home, two things have changed. First, there’s a sign that you cannot take care of yourself anymore. And then there’s the sign that you know you only have limited time to live, which is different for an 80-year-old.”

Moreover, the study apparently corroborated that worry and anxiety add to depression in centenarians. One of the things they are concerned about is the way the country is headed and the world waiting for their grandchildren and great-grandchildren.

The study was published in Gerontology.