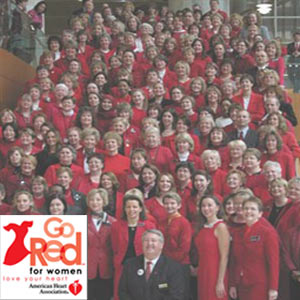 The American Heart Association has dedicated the month of February to heart health and celebrated National Wear Red Day in an effort to make women more aware of the dangers of heart disease. For a number of people heart conditions shows up later in their lives but one cannot wait for something to happen in order to take the necessary precautions. It is important to be aware of the various conditions and the risk factors involved especially when one has a family history of heart diseases.

First Lady Laura Bush campaigned for the cause and the seriousness of the problem via the weekly presidential radio address. Speaking to the nation, she said “By now, many women who’ve tuned in may be tempted to tune out, A few years ago, I might have. Like many women, I assumed heart disease was a ‘man’s disease,’ but the heart truth is this: that heart disease is the leading cause of death among American women.”

Doctors round the country and their female patients are encouraging more women to guard their heart health. Each woman is setting an example, one step at a time. Each learning from each others mistakes.

“I thought I was having a panic attack,” said Anne Hodges who suffered from a heart attack five months ago. “I was trying to be as healthy as I could,” she said. “Eat right. Live right and everything, so I was pretty shocked.” Hodges is one of the lucky ones. She refused to ignore her symptoms and got help. Today, she is alive to tell her story. She now walks faithfully on a treadmill at Memorial University Medical Center’s Heart and Vascular Institute and is on the road to recovery.

Dr. James W. Miller, the cardiology director of the Heart and Vascular Institute explains that “The fact is cardiovascular disease is the cause of death in the majority of women in this country. Breast cancer is a devastating disease with a tremendous emotional impact early in life, but many fewer people die of breast cancer than die of heart disease.”

“If they’re hypertensive, if they’re diabetic, if they’re overweight, if they’re sedentary, if they’re smoking, those are all things they need to change and control so they don’t develop heart disease later in life,” said Dr. Miller.

If one has risk factors for heart disease, Dr. Miller recommends a visit to the doctor and modification of lifestyle. He suggests making changes one at a time. For example, you might start by quitting smoking, then work on losing weight, before making other changes.

Everyone has their part to play, even the male members of the family. Doug Webb, who underwent a triple bypass surgery last year, is encouraging the women in his life to take care of their hearts. “I think it’s very important,” he said, “because your kids, next to your wife, are probably the most important people in your life. You want to make sure they live a healthy lifestyle.”

A number of public figures also contributed to awareness campaign. It was reported that several celebrities contributed to the cause and conducted fashion shows at New York’s fashion week. Designers such as Marc Jacobs, Marchesa and Oscar de la Renta each lent one-of-a-kind red dresses for the event. Stars poured out onto the catwalk to show their support including singer Joss Stone who walked the ramp bare-footed, Cheryl Hines, Allison Janney, Maria Menounos and Heidi Klum; all strutting around in crimson outfits for the cause.