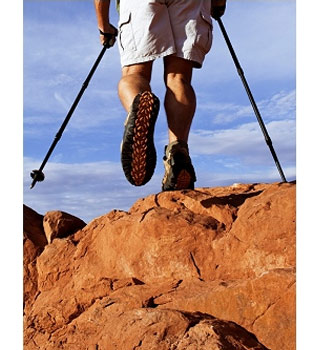 Most adventure lovers would be familiar with the thrills of trekking. Experts at Northumbria University claim to have found that hikers could make use of trekking-poles as it would help them control muscle function. It would also reduce soreness in the days after a hike. This would ease the trekking experience of many adventure lovers. They also observed the effectiveness of trekking poles in the environments for which they were designed.

A study was conducted on 37 physically active men and women. They were split into two groups depending on their similar fitness levels. They were asked to go up and down Snowdon, the highest mountain in England and Wales. One group was asked to hike with the help of trekking poles and the other group was asked to hike unaided. Both the groups were put in similar situations like they carried similar weight in day packs, took similar scheduled rests during both ascent and descent. They also consumed the same evening meal on the night before and ate the same breakfast.

Heart rates and their personal perceived exertion ratings were tracked as the participants were hiking. At the end of the hike, and after 24-, 48- and 72-hour intervals, muscle damage and function were examined through varying tests. The analysis revealed that there was notably less muscle soreness in the group using trekking poles. It also revealed that this group exhibited reduced strength loss and a quicker recovery as soon as the group completed their trek as compared to the control group.

It was also observed that self-rated soreness was at its highest at 24 hours but it significantly reduced in the trekking pole group both at the 24 hour point and at the 48 hour point. Further it was identified that levels of the enzyme creatine kinase, which indicates muscle damage were greater at the 24 hour point in the non-pole group and on the other hand it was close to the pre-taking levels in the trekking poles group. This signified that the muscle damage they experienced was negligible.

“The results present strong evidence that trekking poles reduce, almost to the point of complete disappearance, the extent of muscle damage during a day’s mountain trek,” says Dr Glyn Howatson, who conducted the study. “Preventing muscle damage and soreness is likely to improve motivation and so keep people enjoying the benefits of exercise for longer. Perhaps even more advantageously, the combined benefits of using trekking poles in reducing load to the lower limbs, increasing stability and reducing muscle damage could also help avoid injury on subsequent days trekking. It is often the reduced reaction time and position sense, associated with damaged muscles that cause the falls and trips that can lead to further injury in mountainous or uneven terrain.”

He further said that these findings have a strong impact on exercisers who wish to engage in consecutive day’s activity in mountainous terrain. Trekking poles are anticipated to reduce pressure on the lower-limb joints as much as 25 percent inform pole manufacturers. Despite this the latest study is bound to laboratory or to non-mountainous outdoor settings namely running tracks. The study has particularly focused on biomechanical investigations about the stress on the ankle, knee and hip.

These findings indicate that muscle damage and soreness may be reduced. Hence we hope that trekking poles may help have a delightful trekking experience.