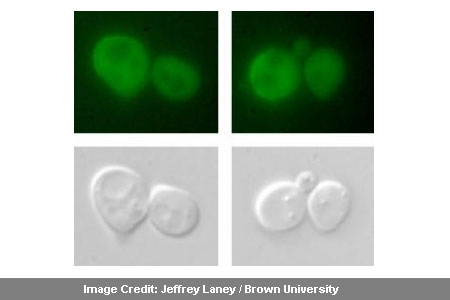 Cells are known to be dynamic altering their state a number of times. This change of state however can be dangerous sometimes like when benign cells suddenly change to cancerous ones. Researchers from Brown University claim to have discovered a novel mechanism that explains this transformation in the state of cells.

The experts associated with this finding apparently observed yeast cells to consequently figure out a way in which cells transform themselves. They found that a cellular ‘machine’ appeared to eliminate a regulatory lid. With the modifying nature of cells having serious implications, scientists find it necessary to comprehend why and how cells shed their old identity to take on a new one.

A better understanding of this will allow researchers to deduce why various cells like stem cells or cells that become cancerous transform. This, the experts hope could permit them in controlling the transformative process in a manner that might help treatment of a wide range of diseases.

The paper’s lead investigator Jeffrey Laney, assistant professor of biology at Brown University and a researcher in the Department of Molecular Biology, Cell Biology and Biochemistry claims to have recognized one way how this change may be occurring. The researcher looked at common yeast called Saccharomyces cerevisae that is used in making bread and beer. The scientist found that a cellular mechanism appears to remove a regulatory lid from genes in the cell. This may probably be allowing the cell to change its state.

“We have known that cells shed their old identity. What we didn’t know is how that mechanism occurred,” said Laney.

By tracking the cellular alteration occurring in baker’s yeast, Laney and his lab could specifically observe the organism as its ‘a’ cells switched to ‘alpha’ cells for self-fertilization. This process the investigator suggests would be analogous to an egg becoming a sperm. On delving further, the team unraveled a regulatory protein that appeared to be ‘seated’ on genes inside the cell. It was found to cap those genes turning them off and resultantly managed them identify.

The protein apparently could be pulled off by another regulatory molecule which then enabled the genes to be switched on. This in turn could probably be transforming the cell from the ‘a’ type to the ‘alpha’ type. According to the experts, the entire concept of cellular change by altering a gene expression state from on to off, or off to on, is considered universal in all cells. Hence even if the genes studied in Laney’s lab do not exist in humans, they have implications.

Laney is of the opinion that understanding how this process happens normally will allow scientists to gain insight into pathological situations when the cell transformation process goes wrong. The finding could further shed new light on many different biological transitions where cells modify or evolve as part of their normal functioning.

With a print version yet to come, this new finding is published online in Nature Cell Biology.