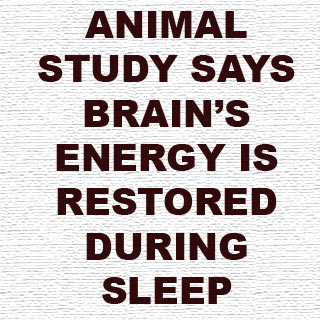 Previously we mentioned longer sleep duration increases the risk of metabolic syndrome in older adults. Researchers from Boston V.A. Healthcare System and Harvard Medical School revealed that in the initial stages of sleep energy levels rose considerably in the brain regions. During waking hours this region was found to be active.

New findings suggest that a flow of cellular energy may reload the brain processes specifically required to function normally while awake. A good night’s rest is relaxing for all, however the biological processes that occur during sleep have been hard to pin down. Researchers identified that the brain restores its energy nightly.

Radhika Basheer, PhD, of Boston V.A. Healthcare System and Harvard Medical School shares, “Our finding bears on one of the perennial conundrums in biology: the function of sleep. Somewhat surprisingly, there have been no modern-era studies of brain energy using the most sensitive measurements.”

Adenosine triphosphate (ATP) known to be the energy currency of cells in rats was examined. Researchers revealed that ATP levels augmented when rats were in non-REM sleep but had overall decrease in brain activity. These analyses were drawn particularly from four key brain regions generally active during wakefulness. However ATP levels were stable when the animals were awake.

Robert Greene, MD, PhD, of the University of Texas Southwestern, a sleep expert who was unaffiliated with the research elucidates, “This research provides intriguing evidence that a sleep-dependent energy surge is needed to facilitate the restorative biosynthetic processes. The authors propose that the surge is related to decreases in brain cell activity during sleep, but it may be due to many other factors as well, including cellular signaling in the brain”.

There was no increase in ATP when rats were forced to stay wakeful post their normal sleep time. Considering this scientists revealed that sleep was necessary for ATP energy flow. Restorative processes absent when we are awake may be revived by this energy. Brain cells intake greater amounts of energy performing daily waking activities.

These findings are according to the June 30 issue of The Journal of Neuroscience.