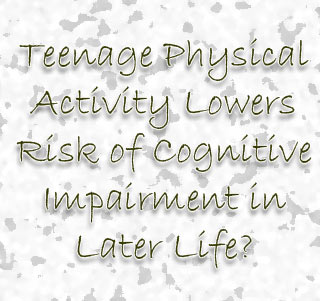 Teenage activity appears to be of prime importance in all aspects. Women who were physically active over their life span had reduced risk of cognitive impairment later on in life as compared to those who refrain from being active. Experts from Sunnybrook Health Sciences Centre claim this is to be a key analysis collected from over nine thousand women.

Physically active individuals lower their risk of dementia and other minor forms of cognitive impairment in old age. However there is limited understanding of activeness during early stages in life and at various other ages. Experts compared physical activities at 30 and 50 years. They further observed late life against cognition of 9,344 women from Maryland, Minnesota, Oregon and Pennsylvania to identify the efficiency of activity at different life stages.

Including overall participants enlisted for the study 15.5%, 29.7%, 28.1% and 21.1% reported being physically inactive at teenage, at 30 years, 50 years and later on in life respectively. Augmentation in cognitive impairment for those who were inactive was between 50% and 100% at each time point. Physical activity for all four ages was entered into a single model. They were adjusted for variables namely age, education, marital status, diabetes, hypertension, depressive symptoms, smoking, and BMI. Experts observed that teenage physical activity status remained notably connected with cognitive performance in old age.

Middleton shares, “As a result, to minimize the risk of dementia, physical activity should be encouraged from early life. Not to be without hope, people who were inactive at teenage can reduce their risk of cognitive impairment by becoming active in later life.”

In conclusion scientists share that mechanisms related to physical activity throughout life associated with late life cognition are likely to be multi-factorial. This highlights that physical activity has a positive impact on brain plasticity and cognition. In addition physical activity lowers rates and severity of vascular risk factors. These factors include hypertension, obesity, and type II diabetes usually linked with increased risk of cognitive impairment.

These findings were published in the Journal of the American Geriatrics Society.