Ever wondered why you felt heart-broken when the heroine in the movie you were watching was ditched by her boyfriend? Or why did you feel so courageous while Harry Potter beat down Lord Voldemort everytime in the Harry Potter series. Why do we feel the same as the character we are watching feels? 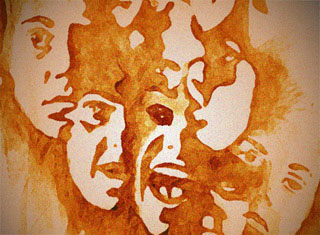 The scientists can now show how we share an emotion with a different character while watching a movie or a hearing a story or reading book. The scientists at the University of Groningen (the Netherlands) observed and compared people’s brain activities when they watched other’s facial expressions or read about emotional experiences of others’.

“We placed our participants in an fMRI scanner to measure their brain activity while we first showed our subject short 3s movie clips of an actor sipping from a cup and then looking disgusted,” said Prof. Christian Keysers. “Later on, we asked them to read and imagine short emotional scenarios; for instance, walking along a street, bumping into a reeking, drunken man, who then starts to retch, and realizing that some of his vomit had ended up in your own mouth. Finally, we measured their brain activity while the participants tasted unpleasant solutions in the scanner.”

“Our striking result is that in all three cases, the same location of the anterior insula lit up. The anterior insula is the part of the brain that is the heart of our feeling of disgust. Patients who have damage to the insula, because of a brain infection for instance, lose this capacity to feel disgusted. If you give them sour milk, they would drink it happily and say it tastes like soda.”

Prof. Keysers notes that what actually happens while we see a movie or read a book is that we activate our body in a way to literally feel the way the protagonist feels as though representing the character. Amazing, isn’t’ it?

The detailed study is published in open-access journal PLoS ONE. The research was conducted by Dr. Mbemba Jabbi, Jojanneke Bastiaansen and Christian Keysers.

A Fight with your Spouse could be good for Health, reveals...