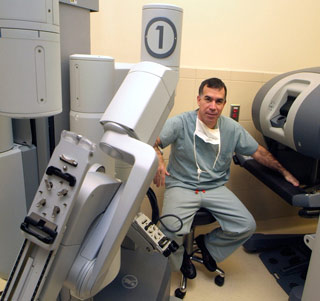 While discarding even a small portion of diseased thyroid gland, patients may be subjected to neck incision a procedure which leaves a neck scar behind. Scientists from the Medical College of Georgia and University of Texas have apparently introduced the daVinci Surgical System which along with the guidance of surgeons conducts the thyroid surgery through the armpit. It has been claimed that this robotic technology does not leave any scars.

The experts enlighten that in the past decade robots have been successfully employed to conduct gynecologic and urologic surgery. The latest robotic technique enables surgeons to operate the thyroid gland without neck incision. It has been explained that the thyroid which regulates the body’s metabolic rate is about the size of a kiwi and found just under the Adam’s apple. On the other hand, benign and cancerous disease can be more than double its size.

Some patients with benign disease may require the removal of only half of their two-lobed thyroid gland. Such patients can possibly undergo a surgery through the daVinci Surgical System and that too without a neck scar. Even though the armpit is much far from the gland, surgeons may simply raise the patient’s arm during surgery. This may not only shorten the path, but also leave a fairly straightforward approach. The gland seems to be easily accessible by the three-dimensional visualization and wrist-like maneuverability of the robot.

Dr. David Terris, Porubsky professor and chairman of the Medical College of Georgia Department of Otolaryngology-Head and Neck Surgery, remarked, “The robot is what makes it possible to easily – and safely – do the work from that distance. Surgeons gain access through a two-to-three-inch armpit incision, then work their way through skin and fat and finally in between two big neck muscles. It’s a long way down a big tunnel to get to that thyroid through the armpit that would not be possible without telescopes and long instruments.”

Having previously compared the technique to five minimally invasive approaches in pigs, Dr. Terris agreed to the fact that the armpit approach is very much applicable in humans. He claimed that the latest procedure takes less than two hours to conduct the surgery taking an hour by a three-quarter-inch neck incision.

Korean surgeons are claimed to be the most experienced with robotic thyroidectomy in humans and are applying the approach to remove both lobes. Dr. Terris believes that with improvement in technology, the United States will also accept this procedure. He mentioned that robotics in other medical procedures are already common in the United States. The thyroid surgeons have cautioned that before employing this procedure, surgeons should complete robotics training, practice thyroid removal on cadavers, watch an experienced surgeon use the technique and then have a surgeon watch them.

The research is published in the current edition of Otolaryngologic Clinics of North America.