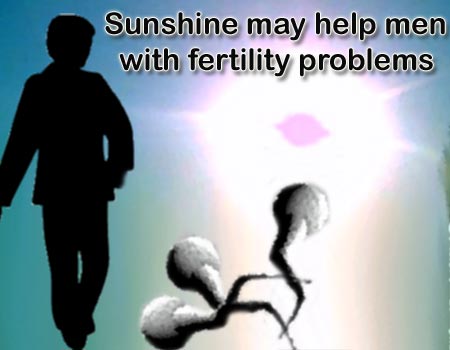 Yokes having tough times conceiving should try getting out of their homes more often. Yes, researchers suggest couples who have fertility issues should spend some more time outside their bedroom walls too, especially men. Getting a tiny portion of sunshine researchers reveal may help men with fertility problems.

The research could bring a ray of hope literally for infertile men. The study is a work of Laura Thomson, a doctoral student from University of Sydney who is investigating DNA fragmentation of sperm a significant factor in male infertility. Going on to reveal that vitamin D deficiency plays a significant role in determining male fertility, researchers suggests the sunshine vitamin may in fact help boost their fertility.

DNA fragmentation of sperm is often a consequence of cellular damage due to habits like smoking. Though it could be also be a result of infection or advanced paternal age.

According Dr Clark, medical director at the Fertility First assisted reproduction clinic in Sydney, “The results show lifestyle changes can be beneficial. Vitamin D and folate deficiency are known to be associated with infertility in women, but the outcomes of the screening among men in our study group came as a complete surprise. The vitamin D deficiency could have been caused by worries about skin cancer and by men trying to avoid too much exposure to sunshine.”

The study involved the blood screening of about 794 men who visited the Fertility First unit. An analysis of these men showed that nearly a third of them suffered from vitamin D deficiency. In addition these men also had a deficiency of folate along with increased levels of homocysteine, an amino acid in the blood commonly associated with cell toxicity. A follow up showed that among these couples just over half conceived naturally or with minimal treatment for those males who completed the treatment for their nutritional deficiencies.

Keeping the screening results as backdrop researchers associated with the study managed to convince about 123 men to undergo some lifestyle changes. These changes included quitting smoking, reducing caffeine and alcohol intake, losing weight and some diet changes. These volunteers were also put on antioxidants and multivitamins for 2 to 3 months. The researchers reveal that the lifestyle changes brought about a 75% reduction in the sperm fragmentation for these men. About 40 pregnancies were achieved among these tested men.

The pregnancies were also found to be natural and with no or minimal need for intervention. Dr Clark mentions that just about three miscarriages or a 6% miscarriage rate was found for those pregnancies compared to women using fertility treatment with an average 22% miscarriage rate. Researchers thus suggest that men need just a minimal quantity of sunshine to enhance levels of vitamin D in their body-about 15 or 20 minutes in the sun should do the trick. Workers can absorb vitamin D by rolling up their sleeves in the tea break.

With one in six Australian couples experiencing infertility, the distinct study supports a previous European study earlier this year that showed a link between women’s vitamin D levels and their ability to conceive.

Presented to this week’s Fertility Society of Australia conference, Dr Clark concludes that these findings could be really helpful for couples struggling to conceive. It could also bring down the costs of fertility treatment.