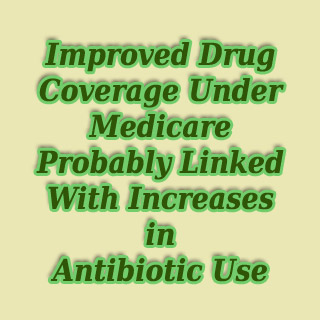 Antibiotics may be beneficial in treating various ailments, but should be consumed only after consulting a physician. If the experts are to be believed then older adults included in Medicare Part D have increased the use of broad-spectrum, newer, and more expensive antibiotics. It was mentioned that unnecessary intake of antibiotics is a grave problem and should be avoided.

Prior investigations have often displayed elevation in medication costs to decrease a patient’s ability to follow prescriptions or take drugs recommended for their chronic conditions. In order to affirm this correlation for the use of antibiotics, scientists initiated a comparison group analysis involving 35,102 older adults. All the study participants were examined for two years before and after enrollment in Medicare Part D. Yuting Zhang, Ph.D., and colleagues at the University of Pittsburgh predicted that this expansion of prescription drug coverage can lower cost spending between 13 percent and 23 percent.

Experts elucidate, “Overuse of antibiotics is a common and important problem, potentially leading to unnecessary spending for prescription drugs, increased risks of adverse effects with no associated benefit and the development of antimicrobial resistance. Multiple programs have aimed to reduce inappropriate antibiotic use in inpatient and ambulatory care settings. Although many of these interventions have helped curb antibiotic prescribing for acute respiratory tract infections and other conditions, there may still be substantial room for additional reductions.”

In the course of the four-year study, volunteers were segregated into four groups. The three intervention groups had no or limited drug coverage between 2004 and 2006. One comparison group had stable drug coverage without caps through their employer throughout the investigation. Participants of the three intervention groups who were encompassed in Medicare Part D in January 2006 had standard benefits like a $250 deductible, a 25 percent co-insurance before drug spending reaches $2,250 and a 5 percent coinsurance for catastrophic costs. It was mentioned that spending was of more than $5,100 or out-of-pocket spending was more than $3,600.

Scientists quote, “Given the high mortality associated with community-acquired pneumonia among the elderly, the finding that changes in drug coverage improve the likelihood of treatment is encouraging. However, we also found increases in antibiotic use for other acute respiratory tract infections (sinusitis, pharyngitis, bronchitis and non-specific upper respiratory tract infection) for which antibiotics are generally not indicated. Our study suggests that reimbursement may play a role in addressing the substantial role of inappropriate antibiotic prescribing and use.”

As out-of-pocket price after Part D implementation declined, an elevation in the use of antibiotics appeared. In relation to the comparison group, antibiotic usage possibly heightened especially among participants changed from no drug coverage to Medicare Part D. It was affirmed that such individuals most probably followed all prescriptions for any class of antibiotic.

However, sulfonamides continued to remain an exception even after Part D implementation as compared to before. Also the two groups with limited drug coverage reported more chances of filling prescriptions for broad-spectrum antibiotics after being recruited in Part D. During the part D implementation, pneumonia was supposedly linked to triple the rate of antibiotic treatment in those lacking drug coverage in the past.

The study is published in the August issue of Archives of Internal Medicine, one of the JAMA/Archives journals.