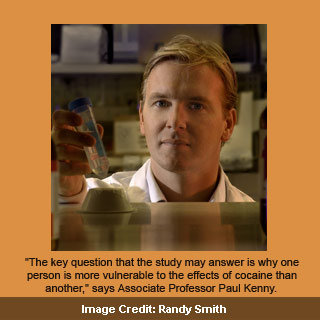 Cocaine and other harmful addictions are known to play up on the psychology of an individual and could be fatal. Researchers from the Scripps Research Institute have supposedly discovered a particular type of genetic material to play a key role in deciding vulnerability to cocaine addiction. The results can possibly give a new direction for the development of anti-addiction therapies.

During the experiment on animals, experts identified a molecule known as microRNA-212 to elevate in the brains of test animals that had extended access to cocaine. It was ascertained that microRNA-212 regulated the amount of cocaine the animals consumed. Scientists explain microRNA-212 as a type of small non-protein coding RNA that can control the expression levels of innumerable amount of genes. MicroRNA-212 and other types of microRNAs are considered as ‘master regulators’ of gene expression.

MicroRNAs are possibly able to coordinate the expression of related genes crucial for brain structure and function. Scientists assume microRNAs to be hallmarks of complex psychiatric disorders. But very little knowledge has been provided about its involvement in addiction. It has been claimed that individuals with serious addiction problems have hampered supplies of this particular non-coding RNA, or the microRNA and does not function properly.

Paul Kenny, team leader, an associate professor in the Department of Molecular Therapeutics at Scripps Florida explained, “The key question that the study may answer is why one person is more vulnerable to the effects of cocaine than another. What we found is that a specific microRNA exerts enormous control over the response to the drug. When it is increased in the brain, it protects against addictive behavior, while a reduction raises vulnerability to addictive behaviors. The practical outcome of increased microRNA-212 expression is that it slams the brakes on any desire to take the drug.”

On consumption of cocaine it is believed that a constellation of brain reward systems is triggered. Addiction to cocaine is apparently considered as a disorder of neuroplasticity wherein, the brain’s ability to continually develop novel neural connections as a response to alterations like injury or disease. Due to the long-lasting structural and functional changes caused by cocaine, sensitivity to the motivational effects of the drug is seemingly heightened. This elevation in sensitivity may further lead to loss of control over intake.

Brain alterations in the brain of mice were examined with extended or limited exposure to the drug. The alterations were scrutinized with the help of a model on compulsive drug-taking. The outcome was that rats with extended access were more likely to generate compulsive-like drug-seeking behaviors. In the course of the research, everyday six hours of extended access to cocaine was allowed to one group. On the other hand, control groups were provided with limited exposure to the drug of around one hour or none on a daily basis.

Kenny enlightened, “Looking into the future it might be possible to develop a small molecule therapeutic that mimics or stimulates the production of this particular microRNA. Once we understand the precise mechanism, we might uncover novel targets that would have a similar effect to acting on the microRNA directly.”

It was noticed that the extended-access group had heightened microRNA-212. This increase was probably two fold in the dorsal striatum, which is a key brain region controlling the development of habit formation, than the brains of control rats. With elevation in exposure to cocaine, the animals displayed rise in microRNA-212 expression and were progressively less motivated. At the time of the research, investigators thoroughly scrutinized the molecular signaling mechanisms producing this effect.

Kenny said, “When we used a virus to drive a large over-expression of the microRNA, there was no effect on the behavior of the limited-access animal. In the extended-access animals, however, their behavior changed abruptly – they took less and less cocaine. In fact, their intake became so low that it appeared they actively disliked the drug. Conversely, when we blocked the actions of the microRNA, the extended access animals began to consume the drug in a compulsive-like manner. MicroRNA-212 is therefore a protective factor helping to prevent the loss of control over drug-taking behavior. Individual differences in microRNA-212 signaling are therefore likely to play a key role in determining vulnerability to cocaine addiction.”

There is a possibility of a link between extended consumption of cocaine and an overstimulation of several neurotransmitters in the brain. This overstimulation is believed to heighten the production of cAMP that is a messenger related to many biological processes. This rise in production may in turn activate CREB signaling. Experts assume CREB to be a transcription factor, a protein that seemingly turns on a gene by binding to it.

CREB is predicted to control the amount of cocaine that can be consumed. Such modifications can possibly increase in expression of microRNA-212. It was observed that elevation in microRNA-212 induced by CREB can significantly amplify the actions of cocaine on CREB signaling and establish a CREB-microRNA-212 ‘loop.’ In turn, microRNA supposedly stimulated the pathway in the brain known to elevate aversive reactions to cocaine. So the motivation to consume the drug is seemingly reduced.

The research was published on July 8, 2010, in an advance, online edition of the prestigious journal Nature.