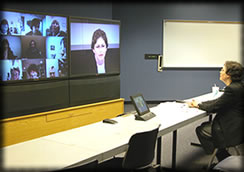 An innovative project which allows cancer experts to diagnose patients using a video link has won a major award. Consultants from across southern Scotland have been using the video conferencing technology to conduct meetings since the success of a pilot project in Edinburgh, which took place a year and a half ago.

The project, called Telemam, won a top prize at the Pfizer P5 Excellence in Oncology Awards and experts will now test if it can be used to consult with patients. It is hoped that the next step will allow patients in rural areas to have consultations by video conference in order to give them swifter access to the region’s top experts.

Dr Ian Kunkler, consultant oncologist at Edinburgh’s Western General Hospital said: “We have been able to show that linking cancer teams by video works and that the results of virtual meetings are as good as with ones held face to face.

“It also means that doctors can spend less time travelling from one hospital or clinic to another, and more time doing clinical work.”

Dr Kunkler added: “We are now hoping to get further research grants to take another step forward and see if we can extend the project to direct consultations with patients by video.”