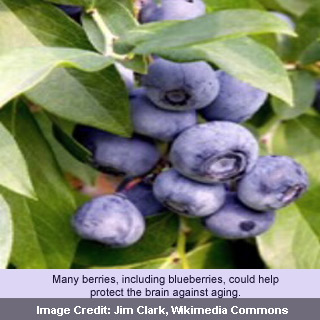 Blueberries, strawberries, and acai berries seem to have taken the center stage for helping the brain to remain in good condition. Experts suggest that berries, and possibly walnuts, activate the brain’s natural ‘housekeeper’ mechanism, which cleans up and recycles toxic proteins. These proteins are apparently associated to age-related memory loss and other mental decline.

During prior investigations, a steady decline in the body’s ability to guard itself against inflammation and oxidative damage was claimed to be a factor involved in aging. So people may be vulnerable to degenerative brain diseases, heart disease, cancer, and other age-related disorders. In a previous research, scientists had fed old laboratory rats for two months on diets including 2 percent high-antioxidant strawberry, blueberry, or blackberry extract. The result was that a reversal of age-related deficits appeared in nerve function and behavior that includes learning and remembering.

Shibu Poulose, Ph.D., who is with the U. S. Department of Agriculture-Agricultural Research Service (USDA-ARS) Human Nutrition Research Center on Aging in Boston shared, “The good news is that natural compounds called polyphenolics found in fruits, vegetables and nuts have an antioxidant and anti-inflammatory effect that may protect against age-associated decline.”

While conducting the current investigation, researchers aimed to pen down the other reason for nerve function reduction in aging. Decline in nerve function seemingly causes decrease in the brain’s natural house-cleaning process. Experts believe that certain cells known as microglia are the housekeepers. In the autophagy process these cells exclude as well as recycle biochemical debris that otherwise would interfere with brain function.

Poulose remarked, “But in aging, microglia fail to do their work, and debris builds up. In addition, the microglia become over-activated and actually begin to damage healthy cells in the brain. Our research suggests that the polyphenolics in berries have a rescuing effect. They seem to restore the normal housekeeping function. These findings are the first to show these effects of berries.”

With the help of cultures of mouse brain cells, the researchers concluded that extracts of berries restrict protein responsible for shutting down the autophagy process. It was suggested that foods rich in polyphenolics should be included in our diet. Berries and walnuts along with various other fruits and vegetables especially those with deep red, orange, or blue colors are rich in Polyphenolics. It is these colors that may come from pigments called anthocyanins which are good antioxidants. The researchers also stressed on the benefits of consuming whole fruits that contain hundreds of healthful chemicals. In fact frozen berries are available throughout the year and they too appear to be rich sources of polyphenolics.

The research was presented at the 240th National Meeting of the American Chemical Society (ACS).