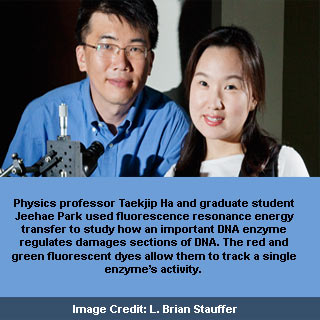 Helicase enzymes are assumed to unzip DNA for replication and perform various other functions for DNA repair and maintenance. Researchers from the University of Illinois have developed a single-molecule imaging technique that possibly unravels the mechanisms of this DNA-regulating enzyme. The research remained focused on a certain bacterial helicase known as PcrA that is included in avoiding unwanted recombination.

Researchers assume that a DNA double helix contains two strands twisted around each other. In case a strand is damaged or broken, the surrounding area is seemingly degraded and leaves a single-stranded region. The process of recombination is then followed by specialized proteins. This process probably involves rebuilding the second strand with the help of the intact DNA as a template.

Having employed the single molecule fluorescence resonance energy transfer (FRET) technique, investigators claimed to have found one of the mechanisms utilized by PcrA for regulating recombination. During this system, two dyes are seemingly put to use for altering in relative intensity depending on their proximities to one another. Both the dyes were attached to the opposite ends of the single-stranded DNA tail.

Taekjip Ha physics professor and a Howard Hughes Medical Institute investigator remarked, “Recombination is essential for DNA repair, but if it runs amok, it causes problems. This helicase controls recombination by removing recombination proteins from the DNA.”

Motor proteins known as helicases are a class of enzymes using chemical energy to migrate along with a DNA molecule like a train on a track. With the help of FRET, experts noted that the two dyes slowly moved closer to each other and then flew apart, over and over again. PcrA may not move with the single-stranded tail but binds at the point of the break, where the double- and single-stranded regions meet. PcrA then appeared to use its motor function for reeling in the tail.

After reaching the end of its DNA rope, PcrA apparently releases itself and starts the reeling in process over again. It seems to exclude all extra problematic proteins that have bound to the damaged DNA as it reels. FRET possibly helped the researchers to gauge the consistency of its motor function. If the experts are to be believed, then on an average PcrA moves one DNA unit known as a base pair for per unit of cellular energy that is put to use and is termed as ATP.

Ha explained, “By combining the structure-specific binding of the enzyme to the DNA and the motor function, the enzyme can reel in the DNA and in the process kick off recombination proteins.”

Since the enzyme was previously examined in relatively large samples, broad distributions of data supposedly trigger contradicting views about the movement of helicase. Investigators were probably unable to affirm if it moves uniformly or on the basis of varying lengths, that can be up to six base pairs per ATP. FRET apparently is a single-molecule technique, so the experts could document a single enzyme’s function, step by step.

They discovered that PcrA travels in uniform steps of one base pair per ATP. Further investigators are being carried out to verify why helicase moves only in one direction. Also the researchers will be creating a reaction environment in the future that will be very much alike to that in vivo. In order to develop this environment, three and four colors of FRET dyes may be required for measuring activities of multiple proteins all at the same time.

The research was published in the August 20 edition of the journal Cell.