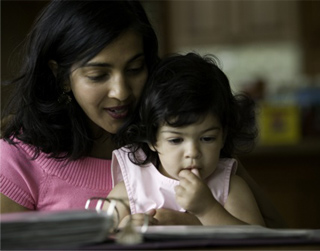 Are children on the verge of outsmarting adults soon? University of Liverpool psychologists have revealed that children around 2 years of age apparently have an inbuilt understanding of difficult grammar even before they start speaking in complete sentences.

The study suggests that infants know more about language structures than they can actually communicate and surprisingly, at a much earlier stage of life than initially considered. They also seem to have the potential to use sentence formations for comprehending more words that may accelerate the process of attaining speech.

Dr Caroline Rowland, from the Institute of Psychology, Health and Society, expressed, “When acquiring a language, children must learn not only the meaning of words but also how to combine words to convey meaning. Most two year olds rarely combine more than two words together. They may say ‘more juice’ or ‘no hat’, but don’t know how to form full sentences yet.

Though it was known that kids aged 2 or 3 may have grammar knowledge as they observe people talk and express words, this study shows that even 21 month old infants are seemingly reactive to varied implications of specific grammar constructions. As part of the study, sentences that comprise verbs which are made up were presented to kids. One image showing a rabbit acting on a duck and the second picture showing animals acting individually were shown to children. The analysts then made up a sentence like ‘the rabbit is glorping the duck’ and said it over a huge speaker. They then told the infants to identify the right image. Apparently, children matched the right image with the correct sentence less by luck.

This analysis essentially reveals that infants have more awareness of sentence construction. According to the psychologists, children may know more than they actually speak. They appear to make use of grammar to understand new words, specifically abstract words like ‘know’ and ‘love’.

The findings are published in the journal Cognitive Science.