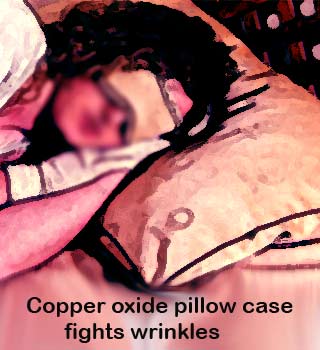 Are you freaked out about having a wrinkled skin? You no longer need to. You can just literally sleep over the problem; we mean it. The latest development in this ever growing world of technology is a copper oxide pillow case that is designed to iron out lines and crow’s feet. You can now forget about splashing thousands of anti-wrinkle creams and you don’t even need to invest in Botox injections.

The ‘magical pillow’ has been designed by boffins at the Cupron company which has its expertise in making copper medical dressings. Development of the pillow case was additionally supervised by dermatologists.

Jeffrey Gabbay, owner of the company, remarked, “The surgeon doing our wound-healing trial remarked how an increase in collagen was helping to heal wounds. We wondered if it might work on fixing wrinkles and lines on the face. So we had some copper woven pillows made up and noticed that over a few days of lying on a cooper pillow lines on the face started to soften.”

He further added, “It has been the most fantastic discovery. The fabric is best at ironing out the finer lines.”

A clinical trial of the pillow case was carried out on 57 participants for four weeks. The participants were given either the copper oxide pillow case which has normal fabric or a similar conventional pillow. Researchers found that at the end of the trial those who had used the anti-wrinkle pillow had fewer lines and wrinkles as against those who had used conventional bedding. They were statistically more likely to have less wrinkles.

Accessorized with copper gloves and eye shields, over 10,000 pieces of this sleeping beauty have sold out in the US through the company’s website. Priced at £17 each, the company plans to now launch it in the UK.