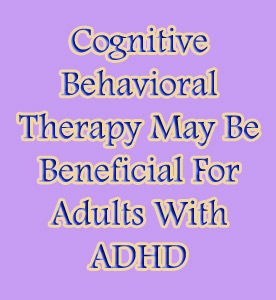 With a considerable elevation in the incidences of attention-deficit/hyperactivity disorder (ADHD), cognitive behavioral therapy (CBT) seems to have come to the rescue. The following tidbit has highlighted the benefits of this therapy which is apparently available on CBTRefree mobile app. According to groundbreaking analysis, a combination of medication and individual sessions of CBT reveals positive outcomes in symptoms through 12 months in ADHD individuals.

The investigators tested cognitive behavioral therapy for ADHD in 86 adults that were treated with medication but did not display clinically significant symptoms. While the study was triggered between November 2004 and June 2008, the follow-up continued till July 2009. From randomized 86 patients, 79 completed treatment and 70 completed the follow-up assessments. The patients were randomized to 12 individual sessions of cognitive behavioral therapy or relaxation with educational support.

Investigators quote, “Approximately 4.4 percent of adults in the United States have ADHD, which is a disorder characterized by impairing levels of inattention, hyperactivity, and impulsivity. Medications have been the primary treatment; however, many adults with ADHD cannot or will not take medications while others show a poor medication response. Furthermore, those considered responders to medications (i.e., 30 percent symptom reduction) may continue to experience significant and impairing symptoms. Thus, there is a need for alternative and next-step strategies.”

In the cognitive behavioral therapy, the experts included sessions concentrated on psycho-education about ADHD and training in organizing and planning. The sessions were based on the fact that while learning skills probably decrease distractibility, cognitive restructuring aids in learning to think more adaptively in situations that cause distress, possibly helping avoid relapses. Steven A. Safren, Ph.D., A.B.P.P., of Massachusetts General Hospital, Boston, and colleagues employed an assessor for rating ADHD symptoms. This assessor utilized an ADHD rating scale and Clinical Global Impression scale. The experts rated the symptoms at the beginning of the trial, at the end of treatment, and at 6 and 12-month follow-up.

Experts comment, “Additionally, because the only other tested treatment is a group intervention, further investigation is needed to examine whether different patients or settings may be more receptive or conducive to an individual vs. a group approach. This study suggests that cognitive behavioral therapy for ADHD in adults appears to be a useful and efficacious next step strategy for adults who show continued symptoms despite treatment with medication. Generally, the treatment was well tolerated, with very low drop-out rates, and had positive and sustained effects on ADHD symptoms. Clinical application of these strategies to patients in need is encouraged.”

On completion of the treatment, it was noted that patients with cognitive behavioral therapy had significantly better ADHD rating scale scores and Clinical Global Impression scale scores. Patients subjected to relaxation with educational support were seemingly unable to report improved results. Even the responders from the cognitive behavioral therapy condition were comparatively higher that the relaxation condition. The result was ascertained after employing the criteria from both the Clinical Global Impression scale and the ADHD rating scale. While the Clinical Global Impression scale was claimed to be 53 percent responders from the cognitive behavioral therapy condition, 23 percent was from the relaxation condition.

On the other hand, the ADHD rating scale was 67 percent and 33 percent, respectively. Self-reported symptoms also appeared to be considerably better for cognitive behavioral therapy throughout the study. Scientists mention that the responders and partial responders in the cognitive behavioral therapy condition maintained their gains over 6 and 12 months. Further investigations can be conducted for determining the usefulness of this therapy in individuals who may be unwilling or unable, for medical reasons, to take medication for ADHD.

The study was published in the August 25 issue of JAMA.