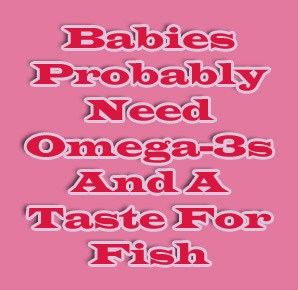 Heading towards the supermarket might just see enthusiastic moms picking up salmon for their toddler after scanning this latest tidbit. A latest research initiated by the University of Illinois claims that babies require omega-3s and a taste for fish. Fishes like salmon are believed to be rich sources of omega-3 fatty acids that avoid coronary artery disease.

Since it has been observed that adults don’t prefer to eat fish twice a week, developing a liking towards it in early childhood itself may help. It has been mentioned that fish-based baby foods have already been made available in Asian markets and are being positively adopted in the United Kingdom and Italy. The researchers developed baby food with both pink and red salmon and concluded that red salmon survives the baby food production process better.

Susan Brewer, a registered dietitian, affirmed, “First, babies need a lot of the omega-3 fatty acids found in fish for brain, nerve, and eye development, and when they switch from breast milk or formula to solid food, most of them don’t get nearly enough. Second, children’s food preferences are largely developed by the time they’re five, so I urge parents to help their kids develop a taste for seafood early.”

In order to increase the amount of nutrition, investigators added bone meal and pureed salmon roe (eggs) in separate experiments. The former ingredient which is the bone meal was made by grinding the bones in the salmon into a powder. It may provide calcium in a form that is readily available for bone building in children. The latter is assumed to provide high-quality protein and is loaded with vitamin D and omega-3 fatty acids, especially docohexaenoic acid (DHA).

Brewer commented, “It’s not enough for mothers to know that toddlers need fish in their diets. They won’t buy a product unless it also appeals to the eye and the taste buds. Our goal is to deliver maximum nutrition in an entrée that’s aesthetically pleasing, and these studies show that we can do just that.”

Though a newborn infant’s brain is probably 50 percent DHA, babies and toddlers have immature livers and can’t synthesize enough DHA for an appropriate supply to their developing nerve tissues. So, included DHA can be ingested in the baby’s food to fulfill this requirement. Salmon is regarded as a mild fish and can possibly benefit toddlers.

In fact, 107 parents of preschool children apparently agree to the benefits of salmon as a baby food. A recent sensory panel initiated in a scientist’s lab claimed that parents found little difference in taste between formulations that contained roe or bone meal and those that didn’t. Eighty-one percent of the parent panelists affirmed to include the fish in their children’s diet even though they themselves don’t eat it.

The research was published in the May 2010 issue of the Journal of Food Science.