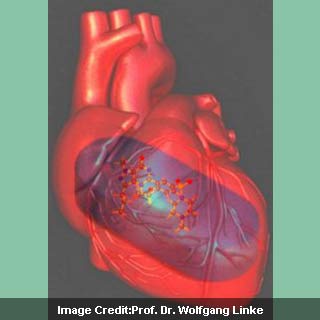 Most of us have heard of the drug Viagra which is used for the treatment of erectile dysfunction and pulmonary arterial hypertension. Revealing another potential use of this drug, scientists from the Ruhr University have found that Viagra could lessen heart problems via its active ingredient sildenafil.

In this animal study, dogs with diastolic heart failure were exposed to sildenafil. As per the results, the latter loosened up tough cardiac walls of the subjects and made them more flexible. In this mechanism, the drug apparently accelerated an enzyme which enabled the giant protein titin in the myocardial cells to calm down.

Prof. Dr. Wolfgang Linke of the RUB Institute of Physiology, commented, “In the so-called ‘Relax’ study of the Heart Failure Network, the efficacy of sildenafil in people is already being tested. If, for the first time, the drug is found to have a positive effect on heart failure, we would already have a molecular mechanism on hand to explain the effect.”

An enzyme called phosphodiesterase 5 A is restrained by Sildenafil which led to excessive formation of a receptive substance namely cGMP. The latter triggered an enzyme known as protein kinase G which interconnected the phosphate group to some proteins. This process of phosphorylation apparently caused the blood vessels to relax. This is why the potency tablet Viagra first entered the market.

Moreover, the titin molecules responsible for stiffness of cardiac walls are also exposed to the phosphorylation mechanism. This seemed to cause titin molecules to relax and promoted cardiac elasticity. Notably, this effect appeared to occur within a few minutes of consuming the drug.

The research is published in the journal, Circulation.