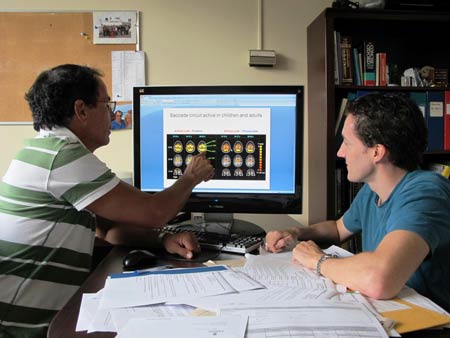 Recently, we had reported on a new drug which might be able inhibit a protein which is capable of spreading Parkinson’s disease. Researchers from Queen University have now discovered that Parkinson’s patients can execute automated tasks better than people without the disease. However, they face a problem when they are asked to switch tasks from something easy to hard. By understanding how this happens, the researchers are attempting to comprehend fresh aspects of the illness, which is known to affect the brain’s capacity to operate on a functional level.

In this study, a sample of Parkinson’s patients and a control group were used. On asking them to look at a light once it was switched on, the patients fared with higher precision as compared to people without the disease. On the other hand when they were asked to look away from the light Parkinson’s patients struggled as they had been requested to change their behavior. Also when they were asked to get ready to change their behavior, patients found it extremely hard to form their new plans.

“We often think of Parkinson’s disease as being a disorder of motor function,” says Douglas Munoz, director of the Queen’s Centre for Neuroscience Studies and a Canada Research Chair in Neuroscience. “But the issue is that the same circuit can affect more cognitive functions like planning and decision-making.”

Ian Cameron, the lead author of this study and a PhD student reported that the findings were essential since they showed that the Parkinson’s patients were biased towards performing an automated response. He further elucidates that medicines currently prescribed for the treatment of the symptoms of Parkinson, which influence motor functioning might have a negative effect on the patient’s cognitive balance. Cameron now plans to carry out functional brain imaging of the patient’s brains to understand which parts are affected by the medications.

The results have been penned in the Neuropsychologia, which is an international interdisciplinary journal of cognitive and behavioral neuroscience.